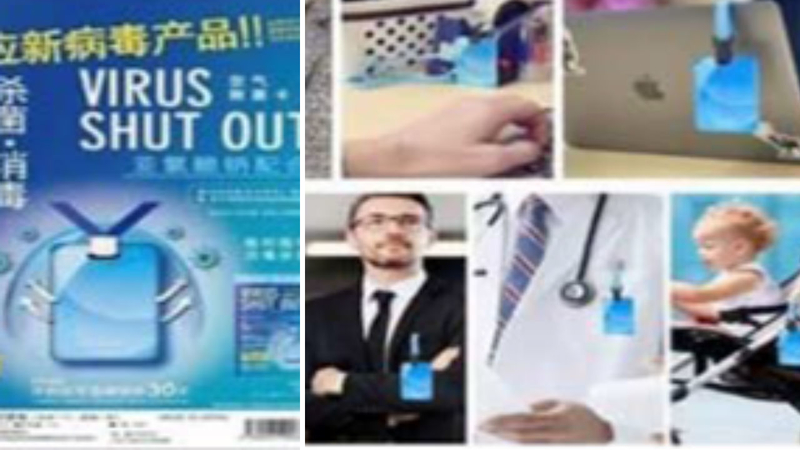 QUEENS (WABC) -- Two men are under arrest in Queens and accused of selling bogus sanitation cards they claimed would kill the COVID-19 virus.

Federal investigators say the men were selling the so-called "Virus Shut Out Cards." They allegedly claimed the cards were air sanitizers with a sterilization rate of 99%.

What Wong and Wu were selling "have not been demonstrated to be effective in treating or preventing the virus," federal prosecutors said.

Specifically, the two men are charged with conspiring to distribute and sell pesticides that are not registered with the Environmental Protection Agency and that are adulterated or misbranded.

According to court records, Wong and Wu advertised "Virus Shut Out Cards" on their company's website and Facebook page, claiming that the cards emit chlorine dioxide and, thereby, serve as "portable space disinfection and sterilization cards."

The Facebook page also claimed the cards "replace masks" and were sold in quantities of 50, at $9.50 per card.

"The brazenly false claims allegedly promoted by the defendants about their product potentially endangered the public not only by claiming to protect against the Covid-19 virus, but also by exposing users to the health hazard posed by a misbranded pesticide," said Acting U.S. Attorney Seth DuCharme.

ABC News reports that random samples of the "Virus Shut Out Cards" were tested by the EPA's National Enforcement Investigations Center and found to contain sodium chlorite in amounts sufficient to convert into chlorine dioxide when exposed to the water vapor and carbon dioxide in the air.

Breathing air with sufficiently high concentrations of chlorine dioxide may cause difficulty breathing, irritation in the nose, throat and lungs, shortness of breath, chronic bronchitis and other respiratory problems.

Lauren Glassberg has more on the 186 heroes honored, including Dr. Anthony Fauci, for their work during the coronavirus pandemic.