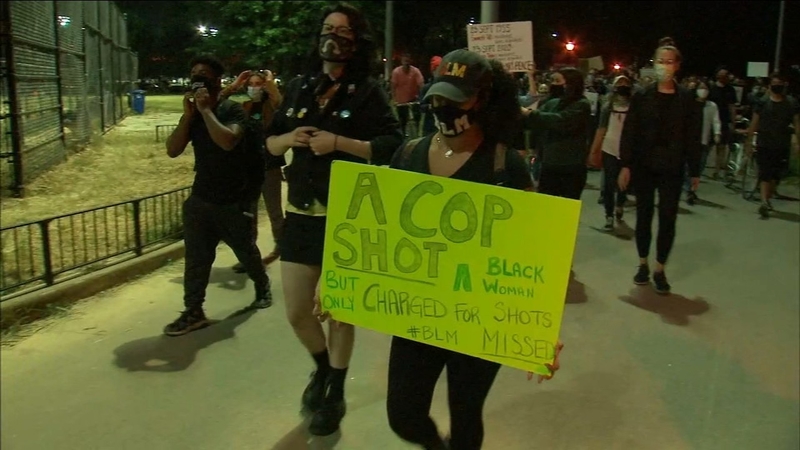 NEW YORK CITY (WABC) -- Demonstrators have taken to the streets again on Thursday, one day after a grand jury indicted a Kentucky officer for wanton endangerment in the Breonna Taylor case.

Her name echoed throughout Greenpoint, with organizers making it clear this protest was not about abolishing or defunding police.

"We are out here for the injustices to Breonna. We are not out here for abolishing anything," one protester said. "We need people to understand, we are peacefully upset. We are pissed. And the reason why we are out on these streets is to let people know that the verdict they came to, that the conclusion that they came to is unacceptable!"

On Wednesday, protesters marched in the thousands in New York City.

Despite the protests, police reported no arrests and the demonstrations remained peaceful.

Hundreds of protesters rallied at 59th Street and Fifth Avenue demanding justice for Breonna Taylor. The crowd overflowed into the street at times.

Thousands of protesters took to the streets in New York City Wednesday night following a grand jury decision in the Breonna Taylor case.

It's safe to assume they aimed for Trump Tower, but the building was heavily fortified Wednesday evening. So instead, they marched around it.

Many protesters said this was the outcome they were expecting.
EMBED More News Videos

Hundreds of protesters took to the streets in New York City.

"What happened in Louisville today was expected," one protester said. "We expected that to happen."
EMBED More News Videos

CeFaan Kim has more on the reaction in New York City to a grand jury decision in the Breonna Taylor case.

Dozens of people on bikes encircled the group of Black Lives Matter protesters, forming a buffer between protest and police.

And many even flocked to the Manhattan Bridge to walk across and protest.
EMBED More News Videos

Protesters march on the Manhattan Bridge after indictment announcement in the Breonna Taylor case.

Meanwhile, police in Louisville, Kentucky, say two officers were shot. It's not clear if the officer was shot during the protests over a grand jury's decision to bring no charges against police for the killing of Breonna Taylor during a drug raid gone wrong.

A Kentucky grand jury charged fired Officer Brett Hankison with three counts of wanton endangerment for firing into Taylor's neighbors' homes during the raid on the night of March 13.

The FBI is still investigating potential violations of federal law in the case.

Despite the indictment, no charges were filed in the death of Taylor, which has sparked outrage throughout the country.
EMBED More News Videos

A Kentucky grand jury brought no charges against Louisville police for the killing of Breonna Taylor during a drug raid gone wrong.

"I know that not everyone will be satisfied with the charges we've reported today," Kentucky Attorney General Daniel Cameron said.

After weeks of protests and months of investigating, Hankinson was accused of firing blindly into several apartments and recklessly endangering Taylor's neighbors, and that the other two officers were justified in their use of force.

"Our investigation found that Mattingly and Cosgrove were justified in their use of force, after having been fired upon by Kenneth Walker," Cameron said.