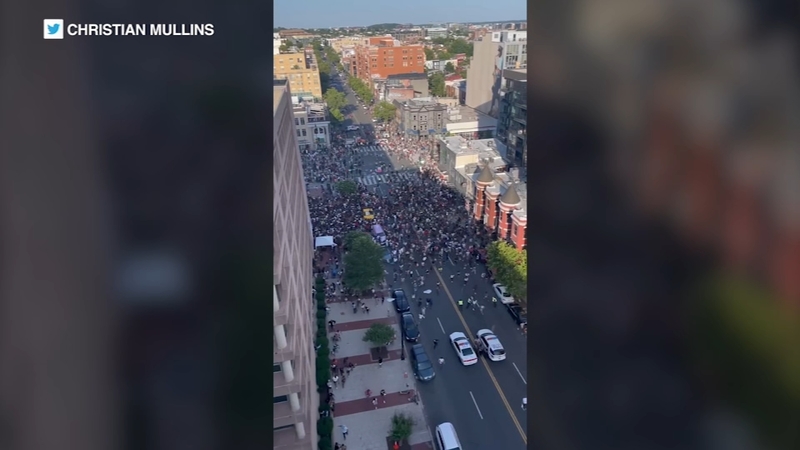 Shooting near concert kills teen, wounds 3 others, including officer

WASHINGTON -- A shooting near an unpermitted concert Sunday evening left a 15-year-old boy dead and several others wounded, according to police in Washington, DC.

Before the deadly melee, he said, two other incidents had already caused panic and trampling at the concert, CNN reported.

Officers responded and contained the area, ultimately shutting down the concert, Contee said. He did not provide details of the incident but said "people started to scatter at that point."

Several people suffered leg or ankle injuries as the crowd dispersed, the police chief said. He said emergency personnel recovered an illegal firearm from one person as they tended to the injured.

Afterward, gunfire broke out near 14th and U Streets Northwest, close to the concert site. The 15-year-old boy was killed, and three adults were wounded, including a police officer, Contee said.

The officer and two adults were hospitalized in stable condition, he noted.

Several firearms were discovered from the scene, including a handgun on one of the adults who was shot, Contee said. But he said the weapon used to shoot the officer has not yet been found.

No police officer discharged their firearm, he added.

More mass shootings than days of the year

The US has suffered at least 277 mass shootings so far this year, according to the Gun Violence Archive. That's an average of more than 1.5 mass shootings every day.

The GVA defines mass shootings as those that kill or wound at least four people.

Recent mass shootings like the Buffalo supermarket attack and the Uvalde school massacre have renewed debates about gun control. In both of those massacres, the alleged gunman was 18 years old and used an AR-15-style rifle.

A bipartisan group of senators has announced an agreement in principle for gun safety legislation which would address mental health resources and school safety.

But sticking points remain, including the issues of funding for state red flag laws and denying firearms to unmarried partners convicted of domestic violence.

Officials vow to crack down on unpermitted events

Both the DC mayor and police chief said permit requirements must be taken seriously.

"We have a child who was killed today at an event that did not have any proper planning for the number of people who were here and with guns involved," DC Mayor Muriel Bowser told reporters Sunday.

"The chief and I will continue to make sure we have the resources we need on these corridors and all of our corridors, but we need some accountability here."

The police chief said officials will "look at what legal action should be taken as a result of an unpermitted event in our city."

"When you have large gatherings in a dense area, all it takes is one person introducing a gun to the situation that makes it deadly," Contee said. "In this case, unfortunately, a 15-year-old lost his life."

The Bureau of Alcohol, Tobacco, Firearms and Explosives (ATF) is assisting local police with the investigation, the agency's Washington Field Division said.