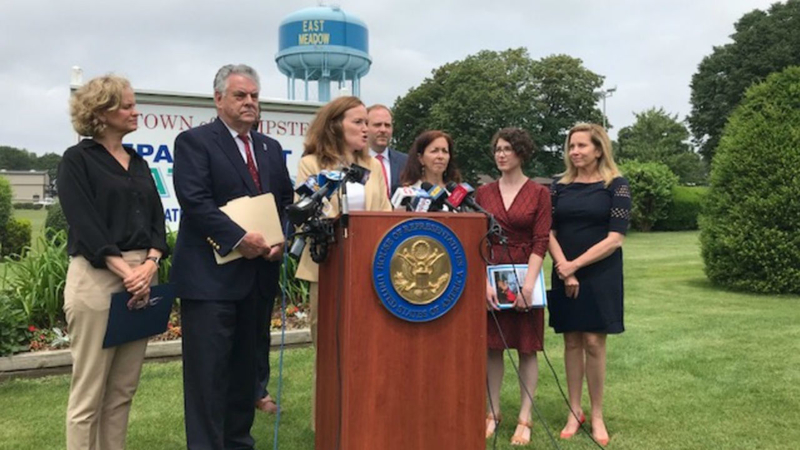 "This is a serious public health crisis and we need the EPA, the Environmental Protection Agency, to act with the urgency that this situation requires," said Congresswoman Kathleen Rice at a news conference outside the Town of Hempstead Water District in East Meadow.

A study conducted in May by the New York Public Interest Research Group found Long Island has the most contaminated drinking water in New York State, and Nassau County has the highest number of water systems with cancer-causing contaminants.

"The public has the basic right and expectation when they turn on the tap that the water is going to be safe for them to drink," said Liz Moran with the research group.

The study found the highest levels of per-and polyflouraklyl substances, also known as PFAS, were in Nassau County compared to Suffolk County. PFAS have been linked to testicular and kidney cancers, liver damage and developmental effects in fetuses and breast-fed infants. A carbon filtration system to filter out the contaminants costs approximately $1 million per well.

Another contaminant recently found in the drinking water on Long Island is 1,4-dioxane - a chemical found in many household products which leaks into the groundwater. 1,4-dioxane can cause kidney and liver damage. It has been classified by the EPA as a probable human carcinogen.

"There are millions of families across Long Island who drink this water every single day," Rice said. "We cannot turn our backs on them. We cannot be indifferent to their health and safety. We need to act now and we need to act fast."

The cost to install a pump to filter out 1,4-dioxane costs approximately $2 million. The Suffolk County Water Authority has already installed a 1,4-dioxane filtering pump in Central Islip and one is planned to be installed in Huntington in the next two years.

Ty Fuller, with the Suffolk County Water Authority, said it would cost the water authority $1.5 billion to filter out all the emerging contaminants and he called upon the federal government to assist local municipalities with the expense.

"We are not going to talk our way out of drinking water pollution," said Adrienne Esposito with Citizens Campaign for the Environment. "But we can protect the public with more federal dollars, more technology and more treatment."

"By the EPA delaying regulations millions of lives are put at risk," Fuller said.

On June 7, the Long Island congressional delegation sent a letter to the EPA urging the EPA to "expeditiously provide Long Island with greater assistance and resources to protects residents from harmful contaminants and pollutants found in our drinking water."

Rice said her office has not yet received a response from the EPA.

To see what's in your water, visit www.nypirg.org/whatsinmywater.