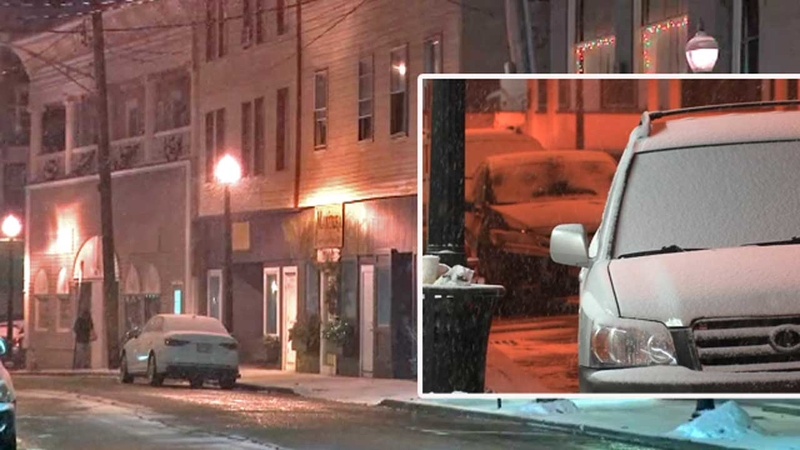 NEW YORK (WABC) -- The latest winter storm to hit the Tri-State area is bringing a mix of snow, rain and high winds across the Tri-State region.

It began as snow that arrived Sunday night. By the early morning hours, it had changed over to rain for much of the area, accompanied by heavy gusting winds.

Coastal Storm Warnings were posted for many areas.

New York City appeared to be spared the worst of the storm, but coastal areas on Long Island and Connecticut were receiving high winds and gale conditions.

Upstate New York is projected to get hit with up to a foot of snow to go along with high winds.

In New Jersey, they saw it all, with the wind, rain and snow making for a big mess before dawn.

While New York City may not get a plowable amount of snow, salt spreaders are filled and will be active, brine trucks will be pretreating roadways and bike lanes. The department is also prepared to deploy plows in every sector.

The city is encouraging motorists to be especially cautious Monday morning, and recommended they take mass transit if possible.

Open Restaurants can continue to offer outdoor and roadway dining during the storm, but the city says that they should be aware that sanitation trucks may spread salt on the roadways.

New Jersey
In New Jersey, Eyewitness News found a few inches of snow on the ground along State Route 17 in Mahwah, but it was melting quickly as the snow turned to rain.

Governor Phil Murphy said the biggest concerns are travel conditions in the north and northwest parts of the state, as well as a risk of coastal flooding further south, and strong and potentially damaging winds that can bring down trees and power lines.
EMBED More News Videos

The biggest concern for coastal flooding is the Jersey shore, where high tide and dangerous storm surge is a possibility.

A State of Emergency has not been issued for New Jersey, but Governor Murphy warned that a potentially dangerous mix of precipitation is possible depending where you are.

"That combination -- risk of power outage, risk of coastal flooding, maybe even some inland flooding -- the combination of all that is why we are here today," Murphy said. "Not that any one piece of it looks like it is for the record books, but the combination adds up to a really messy 14 to 16 hours."
EMBED More News Videos

New York state
In upstate New York, temperatures in the single digits were projected to rise into the 20s and bring heavy snow beginning Sunday night and lasting until Monday night.

At a noon briefing Sunday, New York Governor Kathy Hochul encouraged New Yorkers to get any holiday weekend travel out of the way ahead of the storm system heading to the state overnight.
EMBED More News Videos

"If you have any travel to do for this holiday weekend, please do it today," Hochul said. "The earlier hours before this all starts up this evening. Because overnight's going to be very unpredictable. And with the darkness and ice on the roads and high winds, this could be a very dangerous situation."

The Department of Transportation was mobilizing 20,000 snowplows and had 4,000 personnel ready to respond to any storm-related emergencies.


Long Island/Connecticut
The National Weather Service forecast winds of up to 60 mph across Long Island and widespread coastal flooding there and in Connecticut by Monday morning.

PSEG Long Island was preparing for the potentially strong winds and heavy precipitation, conditions that could break tree limbs, pull down wires and cause outages.

"As we watch the forecast, we have performed system and logistic checks, and have additional personnel ready to jump into storm mode, regardless of the Martin Luther King Jr. holiday on Monday," said Michael Sullivan, vice president of Transmission & Distribution at PSEG Long Island. "In the event of any outages, our crews stand ready to safely restore service as quickly as conditions will allow."

Crews in Hempstead have been preparing for this pending storm.
EMBED More News Videos

Naveen Dhaliwal has more from Freeport.

The town supervisor said they are expecting some snow, but it's the rain that is the biggest concern.

They have been clearing storm drains as 2 inches of rain is expecting.

Flooding along the South Shore is also a concern.