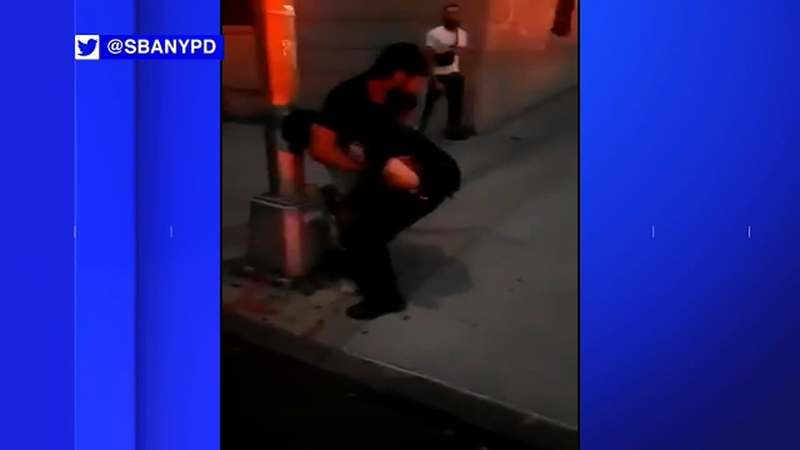 MOUNT HOPE, The Bronx (WABC) -- A man seen on video putting an NYPD officer in a chokehold during a scuffle in the Bronx is facing charges after all.

The Bronx District Attorney's Office is moving forward with the prosecution of 28-year-old Wisnel Manzueta weeks after it initially deferred prosecution.

Video of the incident was posted on Twitter by the Sergeants Benevolent Association.

Police said officers observed a large group and a vehicle illegally parked in front of a fire hydrant at 1815 Morris Ave. the night of July 1.

Police approached the driver and asked him to move the vehicle away and he refused.

A disturbing video circulating on social media shows a crowd taunting and then a man attacking a police officer in the Bronx as they arrested another man. That officer received injuries, requiring him to get stitches.

The 31-year-old suspect continued to refuse to move his vehicle even after officers issued him a summons, so they attempted to place him under arrest.

He resisted and while the officers were working to bring him under control, Manzueta approached and refused to back away.

When police attempted to take him into custody, Manzueta fought back, putting an officer in a chokehold and punching him several times.

At the time, Bronx D.A. Darcel Clark's office said they put off charges in order to gather more evidence, a move that outraged several police unions.

“We expect the Bronx DA to review the case and bring real charges, carrying real penalties, forthwith. If that doesn’t happen, we should just run up the white flag and admit that the criminals are in charge.”