2 slashed during dispute on subway, 2nd incident on same line in matter of hours 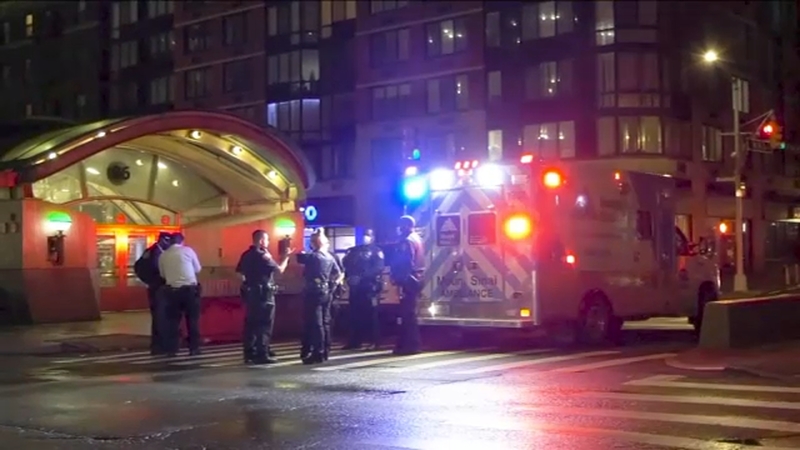 2 slashed on dispute on subway; 2nd incident in a matter of hours

UPPER WEST SIDE, Manhattan (WABC) -- The spate of violence underground continued overnight Friday, with two separate attacks on the same subway line in a matter of hours.

A couple, a 23-year-old man and a 23-year-old woman, were traveling north on the No. 2 train from Times Square around 2 a.m. when a 54-year-old man made bias comments about the sexual orientation of one of the victims, who is transgender and was initially reported to be female.

The suspect then made threatening comments, stating he would "come for both of them" before attempting to hit the man.

The male victim pulled a knife and a brief struggle ensured, before the suspect grabbed the knife and slashed the man in the forearm.

The woman tried to intervene and was slashed in the eyebrow.

When the doors opened at the 96th Street station, the suspect ran off.

The victims called police, and 54-year-old Troy Tyrell was taken into custody at St. Nicholas Avenue and West 127th Street.

He is charged with assault as a hate crime and criminal possession of a weapon.

Another person on the train then provided cell phone video to police, indicating the male victim had the knife first.

Tyrell has five prior arrests, including a manslaughter conviction in 1991 for which he served 10 years in prison.

"Targeting someone due to their gender identity is vile and never acceptable," MTA Director of Communications Tim Minton said. "We're grateful to the NYPD for quick arrests in that incident and want to be clear, with the record pace of installation of security cameras, if you commit a violent act in the transit system it's likely to be caught on video, which means your next stop will be arrest and prosecution."

The male victim, identified as Khleo Finnie, was charged with menacing.

It was the second incident in a matter of hours on the same subway line. Just a few stops away at the 110th Street Station in Harlem a few hours earlier, two men were slashed on the platform.

Police say the suspect entered the station after swiping through but exited to get his dog, which had gotten stuck in the high wheel. He then asked a person to open the gate so he could reenter, but that person refused.

A second person opened the gate, at which point the man sought out the first person who refused and stabbed him in the arm.

The second person was inadvertently slashed in the arms as well.

The suspect fled the station, and a knife was recovered at the scene.

The incidents are raising more questions about the safety of the city's subway system now that trains have started running again overnight.

Mayor Bill de Blasio claims the rise in crime is itself a byproduct of COVID, and as ridership increases, crime will drop.

The MTA has been asking for more of a police presence underground.