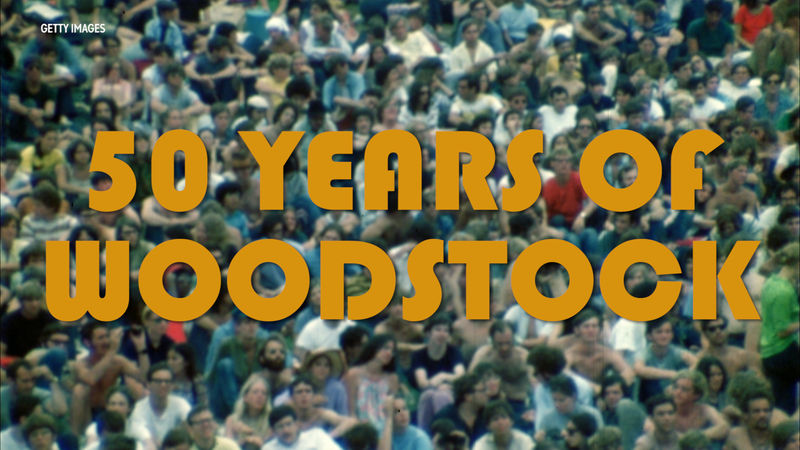 EMBED <>More Videos
BETHEL, New York (WABC) -- Celebrate the 50th Anniversary of the Woodstock Music Festival at the new "We Are Golden" exhibit at Bethel Woods Center for the Arts.

The Museum at Bethel Woods presents "We Are Golden", a very special exhibition that examines Woodstock and what the youth of 1969 wanted for the world, places the festival in the context of the positive societal changes it has spawned and asks today's youth about the changes they wish to see in the world now.

Wade Lawrence, Director and Senior Curator of Museum at Bethel Woods, gave ABC7NY a sneak peek at the large collection of authentic Woodstock artifacts such as instruments, clothing, equipment, art, and photography.

In this special exhibit, you can see original festival ground plans, tickets, and signage from locals of Bethel Woods - ones showing acceptance and resistance.

"Some of the artifacts show that the local folks of Bethel, New York were either happy and embracing or weren't happy at all," said Lawrence.

Others like Ken Van Loan - who owned a garage in White Lake - painted a sign that welcomes festival-goers, reading "WELCOME WOODSTOCKERS".

As you go through the exhibit, you can see artifacts and artwork that represent the era of the sixties.

"They wanted to give all of the attendees a break from the reality that was the world in 1969," said Lawrence. "For the attendees - it represented freedom, seeing other people that thought the way they did, and permission to be themselves."

Other highlights include Jack Casady of Jefferson Airplane's bass guitar and tunic, handwritten lyrics for "Goin' Up the Country" by Alan Wilson of Canned Heat, and a speaker cabinet and mixing equipment used by Bill Hanley at Woodstock which helped to set the standard for outdoor sound engineering.

The exhibit is also interactive with a recreation of the "message tree" - one of the most recognizable places in Woodstock - where attendees would leave notes to find lost friends or belongings.

Sections within the exhibit include "Voices from the Past", which presents the first-person commentary about the changing canvas of American society of the 1960s. "Woodstock Remembered" is an artifact-rich look back at the actual three-and-a-half days of the Woodstock festival. "Woodstock Through the Lens" brings together the best photos of the best photographers to tell the Woodstock story from an artistic, visual perspective.

This exhibition uses the 1969 Woodstock Music and Art Fair as a metaphor for the human response of the sixties, in the hope that young people today may draw inspiration from it.

Woodstock music festival pushed the message of peace, love, and music, and was a groundbreaking event in 1969, featuring performances by Jimi Hendrix, the Grateful Dead, Joan Baez, the Who, and other iconic acts.

The Woodstock 50th Anniversary concert was canceled for this year, but the exhibit can be visited anytime. For more information visit Bethel Woods Center for the Arts.