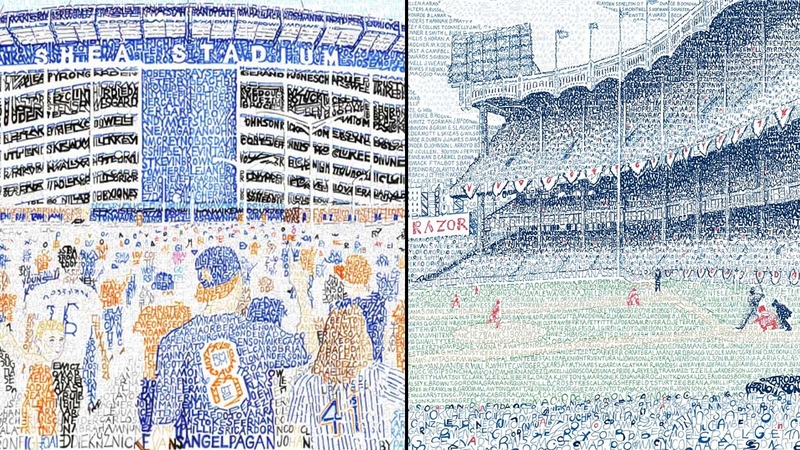 FLATIRON DISTRICT, Manhattan (WABC) -- Writers and poets use words to express artistic thoughts, but that's not the case for one Philadelphia man who uses words to actually create physical art.

Some of word artist Daniel Duffy's most impressive New York City pieces includes portraits of Mets fans gathered outside of Shea Stadium, which are made up of every name of every player (855) in the team's history (1962-2008) and Yankee Stadium, handwritten with the names of every Yankee (1,465) in history (1903-2009).

He always had an art background, but Duffy found his inspiration in this unique form from -- of all things -- trying to impress a woman.

"I was dating a girl, and we were both Philly fans," he said. "We won the World Series in 2008, and I thought it would be so cool if I wrote out the entire journey of that season, every game from that year, to create an image."

Not only does Duffy cover sports, but he also delves into music and history.

"For the New York pieces, I did the New York City skyline and wrote out the streets and neighborhoods for all five boroughs," Duffy said. "I also wanted to make sure that I got all the major landmarks in there (like) One Word Trade Center, the Empire State Building (and) the Statue of Liberty."

The lyrics of "My Way" by Frank Sinatra, who is known for his popularity in New York City, can be found in a portrait of the singer's face.

"A lot of times if you're in the middle of somebody's face, it's really hard to find the word in there," Duffy said. "But it's also sometimes fun to try and find where the word goes."

Depending on the amount of words, Duffy said he spends up to 200 hours on some pieces.

"The more words, the more time," he said. "That's why I like doing song lyrics sometimes; I can get them done in a little less time, 50 hours or so."

Duffy gains his inspiration from meeting new people in new cities like Cincinnati or Seattle who really like what he does for a living.

"There's never an end of inspiration," Duffy said. "The American cities, let alone the international cities, there's plenty to get to."

You can find Duffy's art in booth B8 at the Union Square Holiday Market in Manhattan through the holidays from 11 a.m. - 8 p.m. or make purchases at Art of Words.