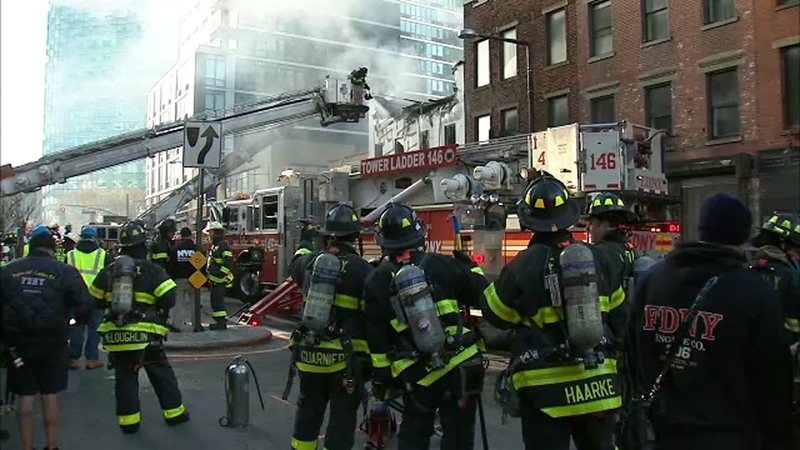 LONG ISLAND CITY, Queens (WABC) -- One person was injured and a well-known restaurant was gutted by a raging fire in Queens Thursday.

The flames broke out at Xi'an Famous Foods on Jackson Avenue in Long Island City and quickly escalated to three alarms.

The building suffered considerable damage to the roof, leading to its partial collapse.

Authorities say that the fire started in a shaft and quickly spread to the roof, and firefighters had to break the side walls of the building in order to get the fire contained.

The response included 140 firefighters and EMS crews from the surrounding area.

Twitter video shows firefighters on the roof trying to maintain the blaze.

#Fire is shooting out of the roof. This is scary (and even with the windows closed, it's getting hard to breathe over here) #longislandcity #LIC @ABC7NY pic.twitter.com/o5ch6YVeVd

— Ruthanne Should Be Writing (@RuthanneReid) January 9, 2020

Authorities say that there was one person who was inside the building when the fire began, but they were able to escape in time.

One person suffered a minor injury and was taken to a nearby hospital, police said, but it was unclear if that was the same person who had been inside.

According to the company website, it was the first restaurant to bring the little-known cuisine of Xi'an to the United States, with signature hand-ripped noodles, secret spice mixes, and Xi'an "burgers" with house-made flatbread.

The cause of the fire is still under investigation at this time.