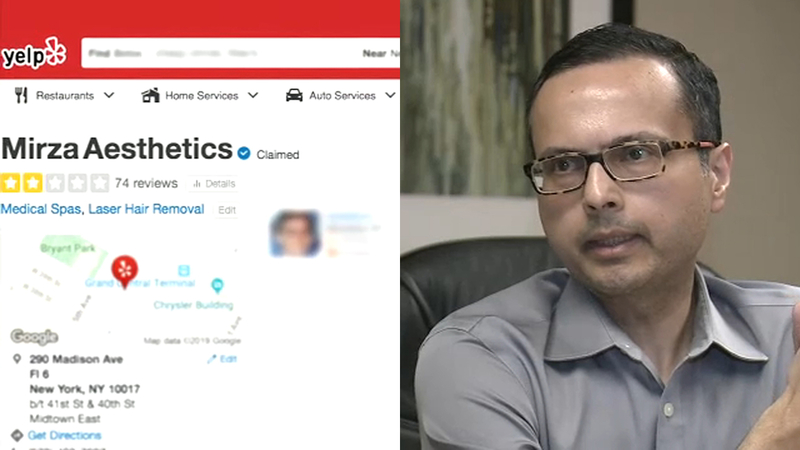 NEW YORK (WABC) -- A doctor in Manhattan says reviews about him on Yelp were false, and now he's suing the people who posted them.

It's not just the bad reviews, but the false ones, he says.

"If somebody is writing that my Botox is coming out of China, that is defamation," said Dr. Muhammad Mirza.

And that forced Dr. Mirza to sue.

"It's a very growing trend," said legal analyst David Schwartz. "Because you have to realize the businesses are under attack, they're under attack by negative reviews. It could ruin their entire business."

One reviewer with the moniker Bryan posted: "I just can't believe this is even legal the way he operate. Never Ever go to this horrible dungeon services!"

Some accused the doctor of using fake products.

He denies the claims and spent 18 months fighting Yelp in California courts to get the names of the reviewers. He won.

"It's easy to write a review because you're hiding behind the screen but in a court of law merit prevails and when merit prevails truth comes out," said Dr. Mirza.

He filed lawsuits against a dozen reviewers for defamation.

One responded on Yelp, saying: "And to Dr.Mirza come sue me lol. You're a joke. I'm within my legal ground and my father is one of the best rated attorneys on Avvo in NY. The only one who should be sued is you for malpractice."

Dr Mirza says he's already won or reached settlements with three reviewers, forcing them to take down the false review and pay an undisclosed amount of money.

The doctor says the legal fight has cost him more than $100,000 in legal fees.

"If you don't defend the truth and if you persistently keep feeding society with falsehood bad things happen," he said.

The ruling also prohibits the reviewers from talking about Dr. Mirza and his practice publicly. But he hopes it's a warning.

"These sites are being hijacked for purposes of trying to destroy legitimate businesses," said Schwartz.