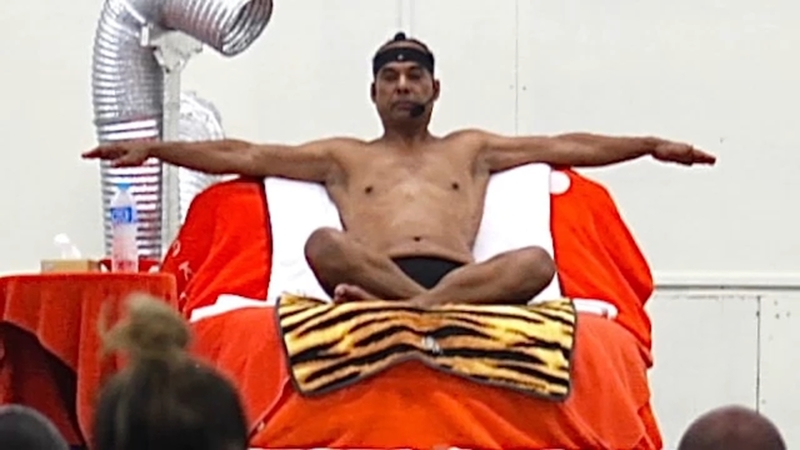 Once at the top of an international yoga empire, Bikram Choudhury is now on the run from creditors, hiding from an arrest warrant and trapped in Mexico where his bills are only growing.

Eyewitness News learned that the founder of the hot yoga brand, whose international Bikram Yoga empire is headquartered in West Los Angeles, had his passport seized in Mexico, where he failed to pay a $180,000 bill at the Princess Mundo Imperial Hotel.

The 76-year-old yogi is also accused of using his trademark name to market his teacher training sessions at the Acapulco resort in violation of court orders.

Bikram's attorney told Eyewitness News that the guru's passport was seized about a month ago. Bikram and his attorney are in the process of gathering the funds necessary to pay off the hotel bill.

On his trail is the woman who brought him down. His former attorney, Micki Jafa-Bodden, won a $6.6 million sexual harassment and wrongful termination lawsuit. Four years after the court judgment, Jafa-Bodden is closing in on Bikram's hidden assets.

"That's a level of taunting as well... that's like the continuation of the type of behavior that he used to level at me where -- nobody can do anything to me I'm untouchable," said Jafa-Bodden, who told the court about a succession of students who complained of sexual assaults.

Six women have sued and settled out of court.

Jafa-Bodden considers a recent development a game changer. The U.S. Department of Justice appointed a trustee to help track down Bikram's assets, including his treasured luxury cars.

Jafa-Bodden's own investigators uncovered a fleet of Bikram's cars that had been secretly transported to a Miami warehouse from Van Nuys, California. The trustee, Robbin Itkin of DLA Piper in Los Angeles, arranged for those 22 cars to be sold at auction by RM Sotheby's in Palm Beach, Florida, next month.

The collection includes a dozen Rolls-Royces, five Bentleys and a rare 1969 Murena 429 GT.

"Bikram loved those cars. Those are his... that's his passion really," Jafa-Bodden said. "I am sure it's been soul destroying for him."

Jafa-Bodden said those 22 cars represent only half of Bikram's fleet -- the rest of the vehicles are still missing.

The sale of the vehicles could bring in more than $1 million, a fraction of what Bikram owes multiple creditors, including Jafa-Bodden.

Jafa-Bodden still says she achieved a measure of satisfaction.

"I believe that Bikram is really at the end of his rope now. He will just run out of places to hide," she said.