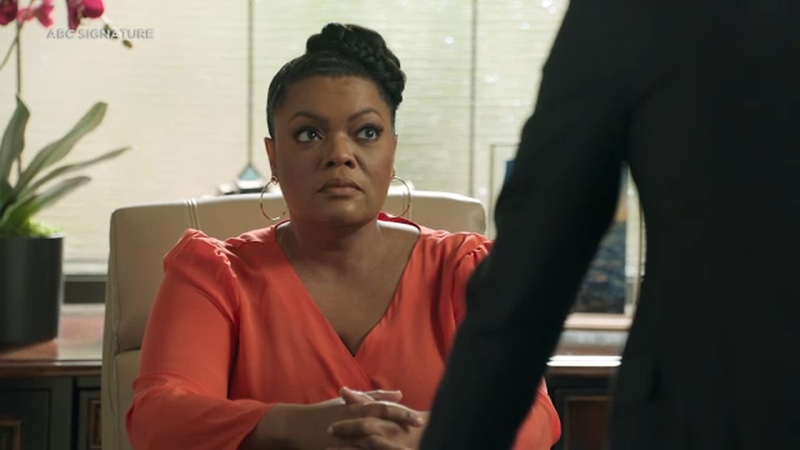 HOLLYWOOD, LOS ANGELES -- Yvette Nicole Brown is back in high school. But she's not a student this time.

Brown plays the principal in the new Disney+ series, "Big Shot." And the role is a big deal for this popular comedy star. John Stamos plays a former bigtime basketball college coach fired for throwing a chair at a referee. He's now coaching teenage girls at her school.

"It shows a woman that can be in charge, handle her business but she ain't got to run roughshod over everybody. She uses that tone and that demeanor when she needs to do so but otherwise, she's also a safe place and a soft place for these students to land and even for John Stamos' character when things go awry, so to speak," said Brown.

Brown says she is thrilled to be working with Stamos, as she's been a longtime fan.

"I watched John Stamos on 'General Hospital' as Blackie when I was in junior high or middle school, I can't even remember," said Brown "And I've had a crush on him that long."

In addition to "Big Shot," Yvette now has another Disney+ project in the works: the sequel to "Enchanted," called "Disenchanted."

"I remain shocked and humbled any time anyone wants to see me for anything," said Brown. "I'm shocked that you want to talk to me today, George Pennacchio! So for me, I never get to the point where it's, like, 'Yeah, this is old hat.' It's never old hat. It's always an honor and a blessing that anything I've ever done has made someone say, 'We'd like to her for this, too.'"

When it comes to "Big Shot," Brown did have someone in mind when formulating her character.

"I always give my flowers to the fabulous Phylicia Rashad. I grew up watching Claire Huxtable, and in my mind, any time I get an audition for a role that is smart and kind and loving and fierce, I think about Phylicia Rashad. So it is Phylicia Rashad with a dollop of Marla Gibbs and a little bit of my mama!" said Brown.