Push in Suffolk County to crackdown on illegal ATVs 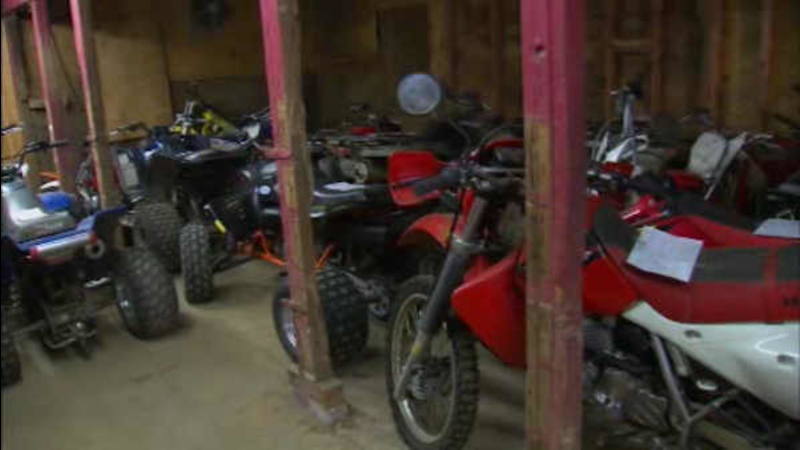 Push in Suffolk County to crack down on illegal ATVs

YAPHANK, Long Island (WABC) -- Lawmakers in Suffolk County are proposing a crackdown on illegal ATVs, after police say the old way of getting the vehicles off the streets wasn't working.

Usually police say they seize an illegal ATV, put it up for auction, and then the same person comes back and buys it, and they're back on the streets. The new law would cut down on that.

61 illegal ATVs have been seized by Suffolk County this year alone.

"Most of these ATV's are not registered, period. They're supposed to be registered," said Suffolk Legislator Kate Browning of Brookhaven. "They're driving around in our local neighborhoods. They could wind up killing someone, hurting someone or themselves."

Browning is behind the new legislation meant to cut down on illegal ATVs.

Under the new law, after two convictions law enforcement can destroy a person's ATV or keep it for their own use.

"We'll be able to keep ones that are useful for public safety," said Suffolk County Police Chief Stuart Cameron. "If there's one we can utilize for law enforcement purposes to actually maybe go out and capture more ATV's."

"It is our hope that this new regulation will act as a strong deterrent in protecting our parklands, roadways and pine barrons," said Captain Christopher Brockmeyer of the Suffolk County Sheriff's Office.

There is no legal public place to ride ATVs in Suffolk County. Not that that stops people.

ATV's are a common sight in residential neighborhoods and in rural areas especially when it snows.

"These people know it so they flee and when they flee it turns dangerous," said Art Pendrick of the Suffolk County Park Rangers. "We've had officers hit and struck by ATV's. This year alone we've had three officers who were hurt. Two of them seriously. One who sustained broken bones in his legs. One who's been put on light duty with three pins in his legs."

There is a private park on Long Island where people can ride an ATV, or can ride around on their own property.