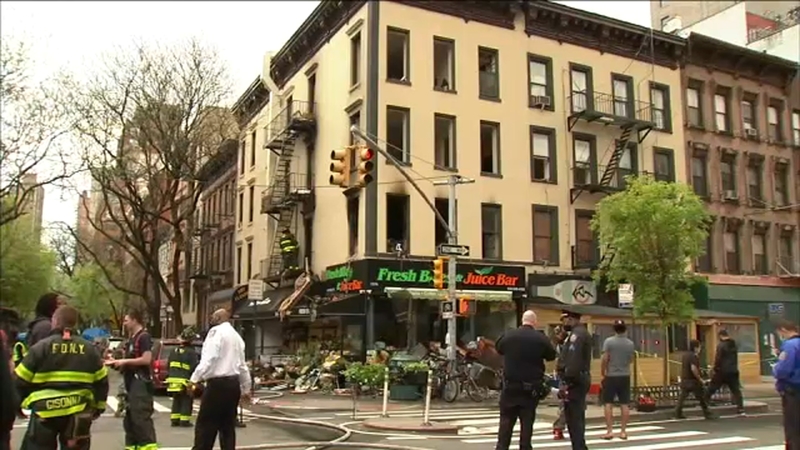 UPPER EAST SIDE, Manhattan (WABC) -- A deadly three-alarm fire burned through a building on the Upper East Side.

The flames started on the second floor before extending up into the third floor.

The other man remains in critical condition. One firefighter suffered a minor injury.

"Units arrived within four minutes, confirmed fire on the second floor. We had to stretch four handlines. Numerous searches through the building. Unfortunately we found two victims with serious injuries. This was a third alarm, 35 pieces of apparatus, 200 members," the FDNY said.

Elizabeth Kelly was in the shower when she noticed the smoke.

"I am so grateful for the fire department, they got here so quickly," Kelly said. "And just living on the third floor is so scary...it was a 2nd floor fire, and so I am trying not think about that, but it's just really, really surreal thing you don't expect to happen."

The building has stores on the first floor and six apartments above. The victims were found on the second and fourth floors.

On the ground floor, devastation for Abdul Ahmed. He and his family opened 'Fresh Bites and Juice Bar' corner store just a few weeks ago.

Ahmed's employees notified him about the fire and thankfully, they escaped without injury.

"It's really heartbreaking to see right now, you know," Ahmed said. "Especially, like I said earlier, as a new business we've only been here for a month-and-a-half, and it's hard to see it right now."

Both the business owner and the fire victim on the third floor told us they heard the blare of the smoke alarms -- advance warning for the tenants and the workers to get of harm's way.

The FDNY said that there were smoke detectors, but it's not inside the fire apartment.

Firefighters not only had to battle the flames, but a heavy cluttering condition inside the building, apparently on all the floors.

"Sometimes there isn't any path into the apartment," FDNY chief Nicholas Corrado said. "And to get to the people if they are in need of help, it's difficult just to get to them."

Officials say getting the debris out into the street was a prolonged operation that took a lot of effort.

"When we come across the heavy clutter, sometimes there isn't even a path into the apartment. It's a problem that we have," an FDNY official said.

The cause of the fire was the impingement of a power strip cord.