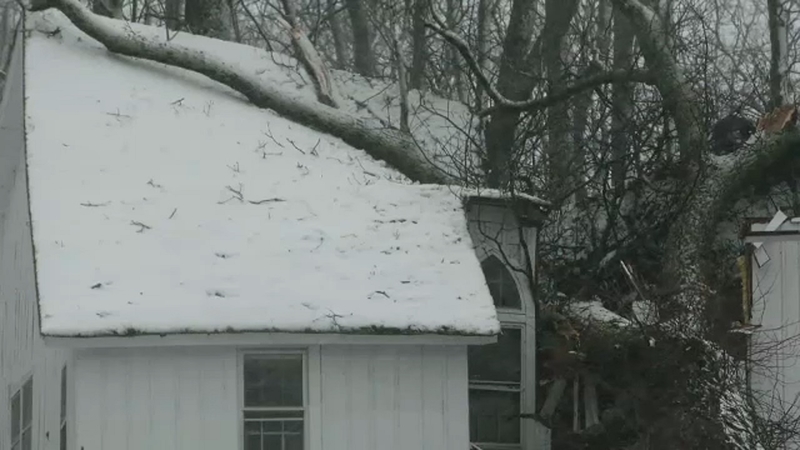 PUTNAM VALLEY, New York (WABC) -- An 11-year-old boy was killed by a falling tree in Putnam Valley during Friday's nor'easter, according to the Putnam County Sheriff's Office.

A large tree had fallen and crashed into a home at approximately 12:15 p.m. on Dunderberg Road, trapping the child underneath.

Emergency responders attempted to rescue the boy but were unable to reach him, officials said.

The boy was pronounced dead at the scene. His mother, who had been home during the incident, was transported to a nearby hospital.

A young woman was also hit by a fallen tree during Friday's nor'easter.

The victim, a York College student, was hit in the head by a tree that fell on the Jamaica, Queens, campus, officials said.

Student injured when tree comes down on the campus of York College in Jamaica, Queens. Fortunately she is expected to be OK. pic.twitter.com/KReilrG4QX

She was taken to Jamaica Hospital with a serious head injury but is expected to be OK.

Another woman was trapped inside her vehicle after a tree fell onto it in Jamaica Estates, Queens.

The tree came down on the Honda Pilot at 4:20 p.m. as it was driving down the Grand Central Parkway Service Road at Avon Road.

She was rescued by responding firefighters and taken to Jamaica Hospital with minor injuries.

As of 5 p.m., NYC Parks Department had 40 confirmed trees down and 393 requests regarding downed trees. They expect those numbers to grow as the wind continues.

Just said on air that crews can’t seem to keep up with the high number of fallen trees in #Queens. Parks Dept says as of 5pm it has 40 confirmed trees down, 393 requests though, and number expected to go higher. pic.twitter.com/KdWBJO5G7P