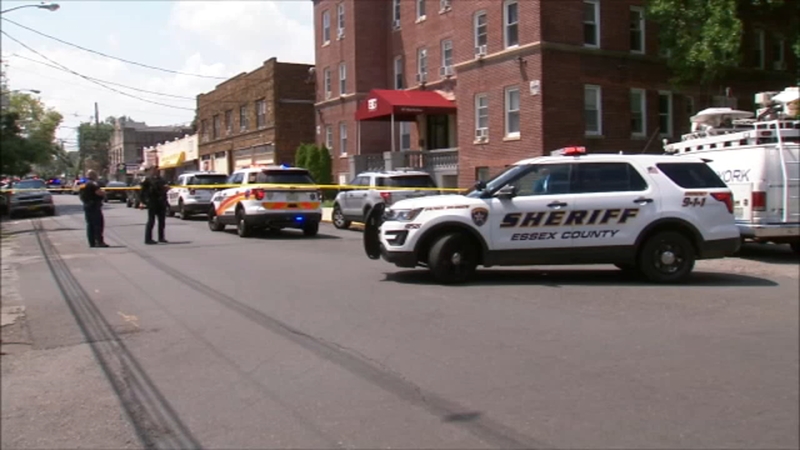 IRVINGTON, New Jersey (WABC) -- A suspect is dead after a 20-year-old man was fatally shot in the neck and a responding New Jersey police officer was shot in both legs, a state official says.

The incident was reported in the 300 block of Myrtle Avenue around 11:30 a.m. Thursday morning.

Police initially were called to the scene for a man with a rifle firing a large number of shots. Witnesses say there were as many as 50 shots fired.

Police encountered a 20-year-old man who had been shot in the neck. He was taken to the hospital where he later died.
EMBED More News Videos

Naveen Dhaliwal has the latest on the shooting that injured a New Jersey police officer in both legs.

One of the first Irvington Police Department officers to arrive was struck in the legs. His injuries were not believed to be life-threatening.

He was taken to University Hospital and law enforcement sources say the officer was conscious and in good spirits.

"When the police arrived they were honestly running back and forth and telling everybody to go back in their house, they were actually running themselves," witness Elijah Irby said. "When the cop limped away they were all in the middle of the street shooting, it was like really serious."

Two other officers were injured in the incident but their injuries were not life-threatening.

Police went after the 39-year-old suspect. later identified as Kaizen Crossen, and more shots were fired. He was discovered dead down the street.

Jude Memeph was trapped in his car with his daughter during the incident.

"I didn't expect my daughter to hear that, to witness that, it was a horrible scene," Memeph said.

Officials say the gunman is a longtime resident of Myrtle Avenue with prior drug arrests.

Local roads were closed as well as Garden State Parkway Exit 144 during the investigation.