7 On Your Side: Man claims hotel bed bug nightmare 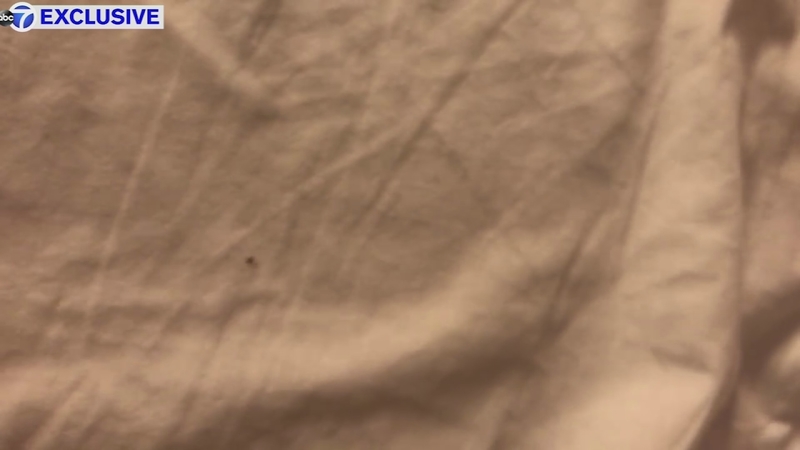 7 On Your Side: Man claims hotel bed bug nightmare

NEW YORK (WABC) -- Bed bugs are a common fear when staying in a hotel, but one man from New York says he had a nightmare experience while staying in Texas.

7 On Your Side was contacted by a man who frequently travels, who said he awoke in his San Antonio hotel room and bugs crawling all over him.

The incident happened about a month and a half ago at a Courtyard by Marriott. The man, who didn't want his name used, said he checked for bed bugs -- as he always does before laying down -- and thought he was safe. But then he says he woke up around 3 a.m. to the feeling of something scratching his scalp, and he was horrified to find bugs all over his head, face and body.

He took videos showing bugs scurrying all over the sheets, and he claims he had bites on several areas of his body.

"I vomited," he said. "I threw up in the shower...it makes me nauseous even talking about it."

He said his reaction was physical.

"My biggest fear, that I ingested them," he said. "They went in my mouth, up my nose, in my ears. It's traumatizing."

Cell phone video showing what a man claims is a bed bug nightmare.

"I said, I'm not one to make a big deal, but what I just experienced was disgusting," he said. "And the girl was like, oh my God."

Later, he says the hotel's general manager investigated and left him an apologetic voicemail.

"We discovered some ants in your room and will have investigators determine what other kind of critters are in there," the voicemail said.

He wasn't buying ants as the culprit, so the next day, he went to a doctor who he says noted probable bed bug bites on his forehead, back and right arm.

So fearing a bed bug infestation in his luggage, he says he threw out his entire suitcase and its contents. It consisted of jeans, dress shirts, T-shirts, and other items that he estimates cost around $1,500.

"My girlfriend was like, 'Don't bring nothing home,'" he said. "I got to our complex and put it in the dumpster."

He says he borrowed luggage and bought clothes to continue his trip, and then he received an email from Marriott claiming tests from two companies turned up no evidence of any pest activity.

Still, he says he's just looking to get reimbursed for his out-of-pocket expenses.

"No one's doing nothing for me," he said. "I'm not looking for a quick dime. I just want to be reimbursed."

After we called Marriott's corporate communications, a representative confirmed pest services were brought in immediately to check that room and others surrounding it. Their expert found no bed bugs in his room, but a number of dead bed bugs and one live one in the room next door.

Marriott said it had been working with this guest and waiting for him to provide the amount he was seeking in compensation. Now that everyone is on the same page, the company is working on processing a claim for his property reimbursement as well as a doctor visit co-pay.

Related: Get rid of bed bugs for less than 15 bucks

Send us your questions, issues, and story ideas to by filling out the form above, by emailing 7OnYourSideNina@abc.com, or contact Nina on her Facebook page or tweet her at Twitter @7OnYourSideNY! You can also call the 7 On Your Side Hotline at 917-260-7697.
Report a correction or typo
Related topics:
new york city7 on your sidebedbugs
Copyright © 2021 WABC-TV. All Rights Reserved.
7 ON YOUR SIDE
Giving Tuesday: 7 On Your Side tips to avoid getting scammed
Cyber Monday deals: Strategies to shop and save big
Holiday shopping: Simple tips to avoid gift card scams
7 On Your Side Black Friday buying guide: Shop early
TOP STORIES
Chris Cuomo suspended from CNN after AG releases documents
Authorities: Student kills 3, wounds 8 at Michigan school
Cops explain how new DNA technology led to arrest in 1999 cold case
Missing NJ couple found dead in densely wooded area
The Countdown: Dr. Oz for Senate? New roadblocks for Biden
Cop was drinking before killing man, loading body in car: Court docs
Police searching for suspects after teen clerk shot in NYC bodega
Show More
FDA health panel endorses Merck COVID-19 pill
Teen shot in neck on way to school says he forgives shooter
AccuWeather: Dry daytime
Bradley Cooper reveals he was held at knifepoint on NYC subway
﻿Crypto: 7 On Your Side Investigates currency and confusion
More TOP STORIES News