7 On Your Side Investigates: Video shows health care worker accused of assaulting patient 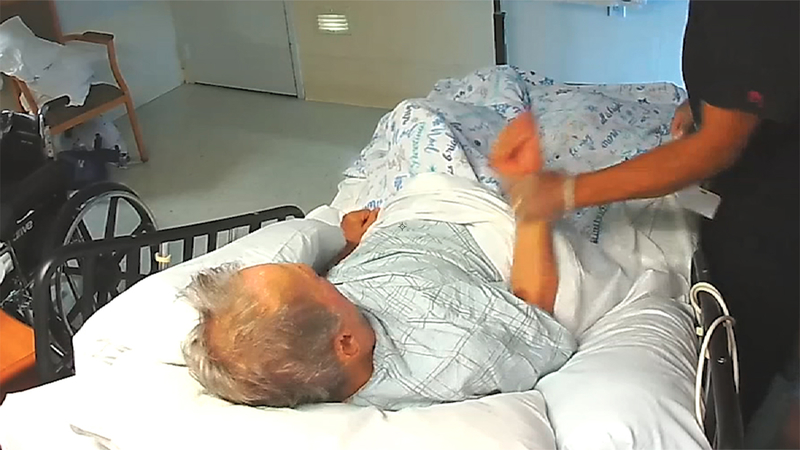 7 On Your Side Investigates: Video shows healthcare worker accused of assaulting patient

UNION CITY, New Jersey (WABC) -- A family in New Jersey is accusing a health care worker of assaulting their elderly father while he drew their father's blood.

The incident happened in August at a long term care facility in Union City and was captured by surveillance video.

That video shows a phlebotomist, Rafael Manchego, drawing Benjamin Mejias' blood while he laid in his nursing home bed.

"I was devastated," said Maria Mejias, daughter of the patient, Benjamin Mejias. "I felt like I failed him."

Maria said she placed her father in a long term care facility because his failing health required more attention than she could give him while also working herself.

"That's what breaks my heart," Maria said. "I really can't have him at home because he needs 24/7 care."

Determined to make sure her father was not mistreated, she said she installed a Ring camera in his room with the facility's permission and it was that camera that captured Manchego's actions.

Turns out, Manchego was not an employee of the facility where Mejias had been living. He is a mobile phlebotomist the facility brought in to draw blood.

In a statement, the facility administrator said Manchego had been banned from providing care in the facility after she learned about the incident.

"Alaris Health at Castle Hill takes allegations of this nature very seriously. The technician depicted is an employee of an outside contracted laboratory service company. He is no longer allowed to provide services to any of our residents or enter our building. We reported the matter to the appropriate authorities and State agencies, including the Union City Police Department. The safety and well-being of our residents is and always will be our upmost priority," wrote Margot Domingo, Administrator of Alaris at Castle Hill, where Mejias lives.

Manchego's employer, Aculabs, also responded promptly with an investigation of its own and fired Manchego.

"As a family owned and operated business for more than 47 years, Aculabs remains committed to providing professional laboratory services to our patients. Our company was founded on the principles of providing accurate, timely and most of all professional service to the patients we serve and at Aculabs; the safety of our patients is our highest priority," wrote Peter Gudaitis, Aculabs President. "Upon notification, Aculabs immediately launched an investigation into allegations of resident abuse. The phlebotomist was suspended pending the outcome of the investigation. During this time members of the Aculabs Management Team interviewed the phlebotomist, spoke with facility personnel and were given access to the video surveillance footage. Upon completion of our investigation, the employee was terminated from Aculabs. As this is an active situation, we must refrain from commenting on any of the details of the matter at hand. Rest assured that our company continues to investigate the matter, takes all allegations regarding our patient care seriously and will assist the Union City Police Department in any way possible."

Eyewitness News spoke to Manchego by phone who declined comment saying he had "nothing to hide", and asked Eyewitness News to contact his attorney, Jordan Goldsmith, who agreed to an interview.

"Mr. Manchego has provided statements on his actions. He's been apologetic. He's indicated that perhaps he was unnecessarily rough the patient, but there's a huge difference between an individual losing patience or being perhaps a little rough in order to achieve a proper end and patient abuse," Goldsmith said. "Under no circumstances, does he believe and the evidence does not support that he was abusive to this patient."

According to the Hudson County Prosecutor's Office, Manchego is facing criminal charges of assault, endangering an injured victim and abandonment/neglect of an elderly victim.

He is scheduled to make a first appearance in court September 18.

While Maria appreciates the quick response, she said the whole experience has only increased her discomfort with not being able to be with her father full time.

"You are trusting the care is as good as you were at home," Maria said. "Not just my father but any person."

DO YOU NEED A STORY INVESTIGATED? Danielle Leigh and the 7 On Your Side Investigates team at Eyewitness News want to hear from you! Call our confidential tip line 1-877-TIP-NEWS (847-6397) or fill out the form BELOW. You can also contact Danielle directly: Danielle Leigh Email your questions, issues, or story ideas to 7OnYourSideDanielle@abc.com Facebook: DanielleLeighJournalist Twttier: @DanielleNLeigh
Report a correction or typo
Related topics:
nursing homeassault7 on your side investigation
Copyright © 2022 WABC-TV. All Rights Reserved.
7 ON YOUR SIDE INVESTIGATION
Ghost Guns: Eyewitness News Investigation
Subway crime: How likely are you to become a victim?
Lawmakers take action to curb ghost guns in NYC
Questions raised over NYC subway cameras after mass shooting
TOP STORIES
Man fatally shot while riding Q train into Manhattan
Mayor declares state of emergency in NYC over baby formula shortage
3 people killed in crash near catering hall on Long Island
Body of teen who disappeared while swimming in NJ reservoir found
Something strange is happening with our universe: NASA
NYPD searching for man behind Harlem stabbing
AccuWeather: Cooler start to the week
Show More
Buffalo mass shooting victims laid to rest one week after tragedy
Israeli flags fill Upper East Side for 'Celebrate Israel' Parade
78,000 pounds of infant formula arrives in US
NJ police impose curfew after large party gets out of hand
Suspect breaks into NYC apartment, stabs man to death
More TOP STORIES News