7 On Your Side: Magnificent vegetable garden in NJ killed after Roundup over-spray 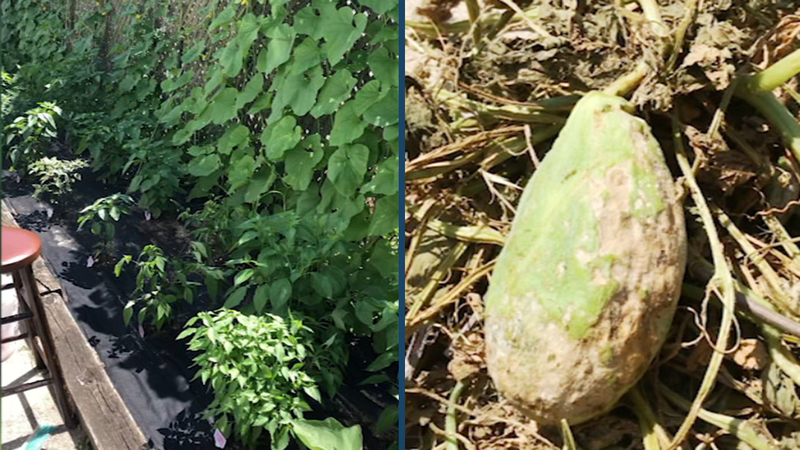 POINT PLEASANT BEACH, New Jersey (WABC) -- A magnificent vegetable garden that had been cultivated for a decade by a New Jersey homeowner was gone in a matter of minutes, the victim of an over-spray of Roundup from their neighbor.

But this wasn't just any neighbor, it was one of the biggest utility companies.

So when the homeowners were powerless to get reimbursed, they called 7 On Your Side for a jolt of justice.

Bruce Boyle's once-beautiful organic vegetable garden in Point Pleasant Beach is now garbage, through no fault of his own.

"Ten years of preparing the soil, gone in two minutes because of someone's negligence, it's heartbreaking," he said.

Also Read: 7 On Your Side: What does NYSC's bankruptcy mean for members?

His next-door neighbor, utility giant Jersey Central Power and Light, hired a contractor, TruGreen, to spray herbicides on the fence that borders the two properties.

Boyle says that minutes after spraying, the weeds shriveled up -- but the chemicals also killed everything thriving on the other side of the fence, melons turned to mush.

"I ran over and said, 'What are you spraying?'" Boyle said. "He said, 'Roundup,' and my heart dropped through the ground instantly. I was heartbroken, but I was more concerned for my kids. They were nauseous and sick."

The plants were withered on the vine, literally.

"Six months on this year's crop, and it's all gone," he said.

Also Read: 7 On Your Side eases frustration over trade-in car loans in New Jersey

And this was no ordinary garden. Boyle begins in the basement, raising 60 vegetable plants from seeds. Then, the fisherman puts his catch in the dirt.

"I bury 30 bluefish three feet down, that gives the soil the nutrients," Boyle said. "That way I don't have to use chemicals. It's just nature."

His garden was healthy, bountiful, thriving. But now it's burned, blistered, and blighted.

"The veggies are burned all over," he said. "It's shot, garbage. All this fruit is tainted."

He reached out to JCP&L, who he says told him to take a hike.

"JCP&L says it's not their problem because they hired a subcontractor to do this weed work," he said. "They were numb to it. They could care less about what they do. They have a big sign up, they're good for the environment, yet they're spraying Roundup on my kids."

Also Read: 7 On Your Side helps NYC teacher get late husband's pension

We contacted JCP&L, who referred us to their contractor, TruGreen. After weeks of back and forth, they sent a representative to survey the damage.

TruGreen apologized, agreeing to pay the Boyles $5,000 for the damage it caused.

"They accepted what they did and acknowledged the wrongdoing," Boyle said.

Even though $5,000 will just barely replace the soil, the sweat equity of tending the garden is priceless. Still, the father of four will replant and start all over.

"I'd like to thank 7 On Your Side so much," he said. "None of this would have happened if you weren't involved."

JCP&L said it was glad the property owner and the contractor came to a mutually satisfactory agreement, but when we asked them to put down mulch to stop future weed growth and inhibit the need to spray herbicides in the future, the utility balked.

And when we asked the utility, as a courtesy, to warn the Boyles in the future before future herbicide spraying, it wouldn't answer our question.

But TruGreen DID promise to warn the Boyles before any future spraying. Their representative who surveyed the damage said it was obvious the family puts their heart and soul into the garden, and to see it go to waste was a tragedy.

Email 7OnYourSideNina@abc.com, or contact Nina on her Facebook page or tweet her at Twitter @7OnYourSideNY! You can also call the 7 On Your Side Hotline at 917-260-7697 or fill out the form below.
Report a correction or typo
Related topics:
societypoint pleasant beachocean countyorganicpower plantfoodchemicalsgardening7 on your side
Copyright © 2022 WABC-TV. All Rights Reserved.
TOP STORIES
TX school shooting leaves at least 19 children, 2 adults dead
Uvalde school shooting: What we know about 19 kids, 2 teachers killed
Jersey City police fatally shoot man after report of shots fired
Fleet Week New York returns to the Big Apple
AccuWeather: Sun and clouds with a cool breeze
Matthew McConaughey: 'We must do better' after massacre in hometown
'People are getting numb': Texas mom reacts to mass shoot at school
Show More
A look at some of the deadliest US school shootings
Rep. Antonio Delgado to be sworn in as NY lieutenant governor
Biden to sign policing order on anniversary of Floyd's death
Biden addresses nation on 'horrific' Texas school shooting
Alleged shooter in unprovoked subway murder surrenders
More TOP STORIES News