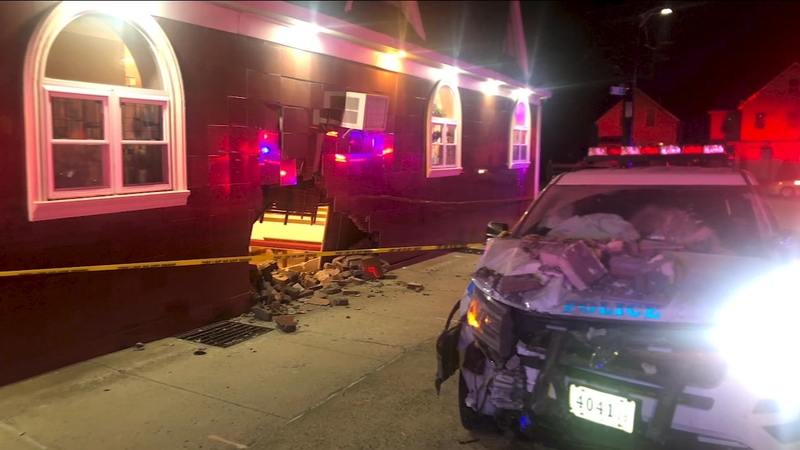 NEW YORK (WABC) -- A local house of worship was reduced to rubble after a police SUV smashed through its tabernacle wall.

Fortunately, nobody was seriously injured. Only the church's finances were scarred when more than a year after the accident, a big buck claim with the city hasn't been paid.

The Judah Tabernacle usually looked beautiful and packed with parishioners.

But in March of 2020 after 3 a.m. on a Sunday morning, it was a different scene in their sanctuary.

"I couldn't believe that this happened," said Joniel Edwards, a pastor.

A two-ton NYPD SUV swerved off the street and plowed through the wall of their tabernacle, at the exact spot where churchgoers normally worship.

If the accident had happened eight hours later, the pews would've been filled with congregants.

The Judah Tabernacle was celebrating its eighth anniversary.

"The mercy of God," Jonah said. "That they weren't hurt."

But more than a year after the accident, after spending more than $80,000 of their own savings and congregants contributions to repair their church, they haven't gotten any payment from the city.

"Not a dime," Edwards said.

After the accident, co-pastors Ariel and Johah Edwards, along with their daughter Joniel, filed an insurance claim

"The insurance company explained to us that we're not covered for that kind of damage," they said.

So within the 90-day window in June of 2020, they filed a claim with the city comptroller's office. The first big delay was that there was no police report.

"Without that could you even put in for a claim?" 7 On Your Side's Nina Pineda asked.

"Initially I was waiting for the police report, but I decided to file anyway," Joniel Edwards said.

Joniel says the NYPD finally received the report nine months after the accident.

"We didn't get the police report until December," she said.

They sent it to the comptroller's office, but nearly a year after filing, their claim is going nowhere.

"It's been emotionally draining and exhausting," Joniel Edwards said.

As a last resort, the pastors asked a lawyer to help. His advice was to call 7 On Your Side.

"And we don't charge, we just want you to put in a good word upstairs," Pineda said.

So last spring, 7 On Your Side asked the city to resurrect the claim.

Last May, the church settled with the comptroller who stated it did, "Everything in our power to resolve it as soon as possible, despite delays outside of our control." They expedited a check for the full amount of the settlement, $62,000.

And that's just what the church received just days ago.

"Thanks to God and Nina!" the Edwards said.

ALSO READ: 7 On Your Side helps consumer avoid a hot tub hustle

Email 7OnYourSideNina@abc.com, or contact Nina on her Facebook page or tweet her at Twitter @7OnYourSideNY! You can also call the 7 On Your Side Hotline at 917-260-7697 or fill out the form below.
Report a correction or typo
Related topics:
religion & spiritualitynew york citynypd vehiclenypd7 on your sidecar into building
Copyright © 2022 WABC-TV. All Rights Reserved.
7 ON YOUR SIDE
7 On Your Side tips to dig out of credit card debt
Fake at home COVID tests are out there - how to spot them
Tips to safely donate to Bronx fire victims without being scammed
How to avoid car lease buy-out 'rip-offs'
TOP STORIES
1 dead, several injured after NYC gas explosion, building collapse
Mom, child dead after vehicle found floating in pond in New Jersey
Greater flexibility for at-home learning as NYC students return
At-home COVID-19 test request website goes live 1 day early
De Blasio will not run for governor as Hochul takes lead in poll
Mayor Adams admits feeling unsafe in NYC subway system
Wake today for murdered 19-year-old Burger King worker
Show More
AccuWeather: Milder but brisk
New date, venue announced for Grammy Awards
New York to boost school aid, offer tax relief in Gov. Hochul's budget
NJ Gov. Phil Murphy sworn in for second term
Teens allowed to drive big rigs in new federal program
More TOP STORIES News