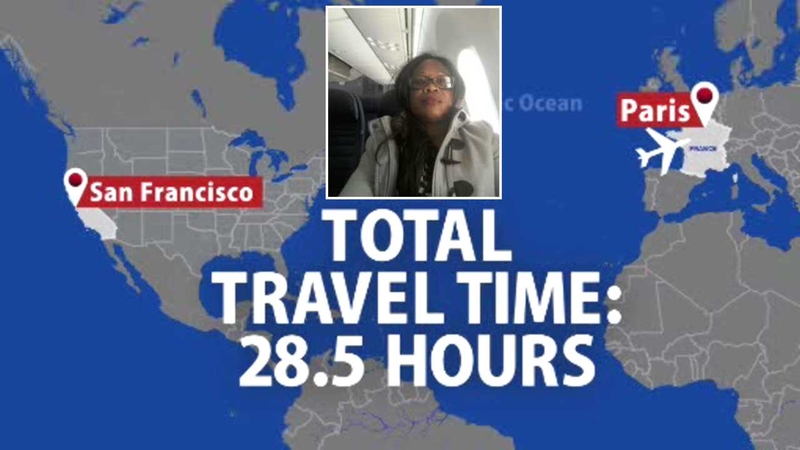 NEWARK, New Jersey (WABC) -- United Airlines has been in the hot seat after security dragged a man off one of its flights, after the man refused to give us his seat. Now, United is apologizing again, saying one its passenger's 28-hour nightmare in the air was unacceptable.

The airline called the incident, which it just settled in a confidential lawsuit, "a horrible failure."

The passenger, Lucie Bahetoukilae, doesn't speak a word of English -- only French. Her niece translated her conversation with 7 On Your Side, walking us step-by-step through how United Airlines allowed her onto the wrong flight.

She was supposed to be going to Paris, but instead ended up on the west coast in what would be a full-day debacle.

Bahetoukilae's boarding pass read: "Newark to Charles de Gaulle." She went to the gate stamped on it and said a United representative scanned it. So she boarded the plane and headed for her seat, 22C.

"When she went to sit someone was sitting there already," her niece, Diane Miantsoko, said. But she said the flight attendant looked at her boarding pass and instead of questioning it, sat her somewhere else.

Bahetoukilae never realized United Airlines made a last minute gate change. She said United never made the gate announcement in French or notified her by email.

"If they would have made the announcement in French, she would she have moved gates," Miantsoko said. "Of course, because she speaks French she would've moved to another gate."

So instead of flying from Newark to Paris, a 7 1/2 hour flight, Bahetoukilae flew nearly 3,000 miles, in the wrong direction, to San Francisco. There, she endured an 11-hour layover in the airport. By the time United got her rerouted home to France, she had been traveling for more than 28 hours.

But more than the inconvenience, the family's main concern is the apparent security lapse by United.

Miantsoko contacted 7 On Your Side to help get answers. She said she was not seeking a refund.

"This is not about money, this is about United getting serious with their employees," Miantsoko said.

7 On Your Side contacted United and the airline admitted fault, saying it: "mistakenly put her on the wrong flight." And even though Bahetoukilae wasn't seeking a refund, she got one along with a voucher for another trip to visit her beloved God children in the future.

United Airlines apologized and also paid for accommodations it hadn't offered Bahetoukilae, when she was waiting for her return flight in San Francisco. Also, an airline representative said United is working with their team in Newark to prevent this from happening again.
Related topics:
travelnewarkunited airlinesair travel7 on your sidenewark liberty international airport
Copyright © 2022 WABC-TV. All Rights Reserved.
7 ON YOUR SIDE
How to get reimbursed for at-home COVID tests
7 On Your Side: Tips for ordering your free at-home COVID tests
Woman wrongfully fined $259K for neighbor's violations in NYC
7 On Your Side tips to dig out of credit card debt
TOP STORIES
Fallen NYPD officer donates organs as final heroic act
2nd NYPD officer dies from injuries in Harlem shooting
Yolanda Vega retires from NY Lottery after 3 decades
16-year-old arrested in shooting death of New Rochelle student
AccuWeather: Back to bitter; Alert for Saturday
NYC shortening COVID quarantine, isolation periods for students
Judge grants stay in NY mask mandate case, keeping it in effect
Show More
Woman stabbed in leg inside NYC subway station following dispute
Apple CEO allegedly stalked by woman who showed up at house
Man denied heart transplant because he has not received COVID vaccine
90-year-old woman beaten in bed during NJ home invasion
Man shot during dispute in Jacobi Hospital waiting room
More TOP STORIES News