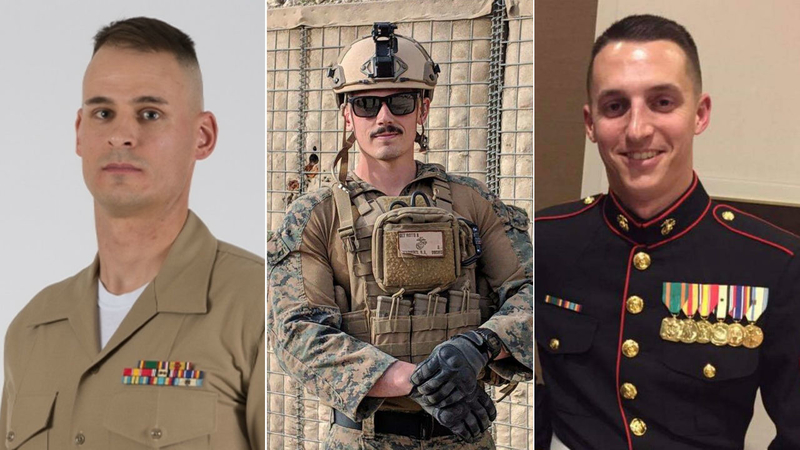 CLAREMONT, Bronx (WABC) -- The three U.S. service members who were killed by a roadside bomb in Afghanistan Monday have been identified, and two of them are from New York.

Cpl. Robert A. Hendriks, of Locust Valley, Long Island, and Staff Sgt. Christopher Slutman, of the Bronx, died in the blast, along with Sgt. Benjamin S. Hines, of York, Pennsylvania.

Henriks was just 25 years old and joined the military after graduating Locust Valley High School. He is being remembered as a hard-working man with a big heart.

"All of us in the county, our hearts go out to the family," Nassau County Executive Laura Curran said. "And we want to thank Cpl. Hendriks for his service."

Hendriks' brother is also a Marine, and his duty now is to bring Robert's body back home.

"Monday evening, the knock on the door no parent ever should hear came," their mother said in a text message. "We are inconsolable and broken into a million pieces. But I am and always will be proud to call my sons United States Marines."

Slutman was a 15-year veteran of the FDNY from the Bronx who leaves behind his wife, Shannon, and three daughters.

Slutman most recently worked as a firefighter at Engine 46 Ladder 27 in the Claremont section of the Bronx. He is also a lifetime member of the Kentland Volunteer Fire Department in Landover, Maryland.

The Stephen Siller Tunnel to Towers Foundation announced Wednesday that it will pay off the Slutman family's mortgage and donate $25,000 to his wife.

Video from Afghanistan showed some of the wreckage after the roadside bomb exploded on Monday. An Afghan contractor had been thought to be among the fatalities, but he was found alive.

"We feel and mourn the loss of these Americans with their families and loved ones," said Gen. Scott Miller, Commanding General of Resolute Support and United States Forces - Afghanistan. "They volunteered to protect their country. We will continue our mission."

Monday's attack came as U.S. officials had been negotiating a peace deal with the Taliban to end this 18-year-long war, which has claimed the lives of close to 2,400 American service members.

Currently, 73 FDNY personnel are on extended military orders in branches of the United States Armed Forces, serving around the world. There are 1,425 FDNY members who are military reservists or veterans.