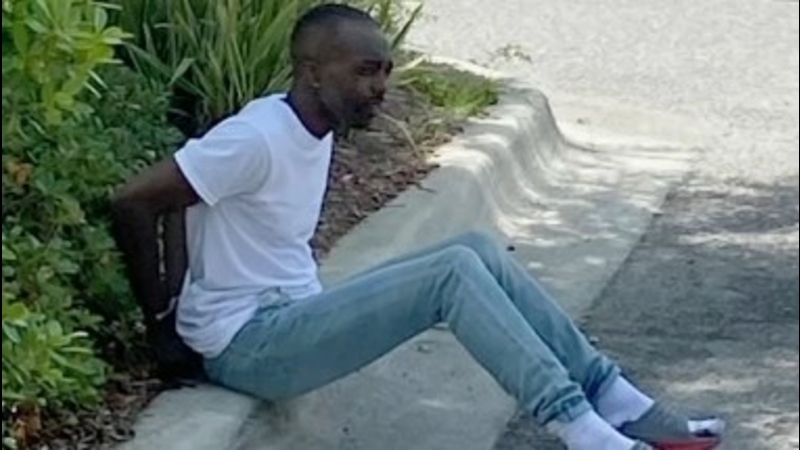 TIMES SQUARE, Manhattan (WABC) -- The man who allegedly opened fire in Times Square over the weekend, wounding two women and a 4-year-old girl, made his first court appearance Thursday.

Farrakhan Muhammad was ordered held without bail pending an extradition hearing, appearing from the Bradford County Jail in Starke, Florida.

The county judge appointed a lawyer to discuss the extradition process with Muhammad, who will return to court Thursday, May 20, at 10 a.m.

His girlfriend, Kristine Jamaica Vergara, also appeared in court, telling the judge she is from Jacksonville, where her mother lives.

She is charged with accessory after the fact to second-degree attempted murder, and the judge determined she posed a flight risk and set her bail at $500,000.

Muhammad was apprehended Wednesday by U.S. Marshals and members of the New York/New Jersey Regional Fugitive Task Force while he was eating in a vehicle in a McDonald's parking lot.

"He tried to run, went out of state, but the NYPD always is able to find people," Mayor Bill de Blasio said. "This is something everybody needs to understand. Anyone who means to commit a crime, understand the NYPD, more than any time in previous history, is doing an outstanding job tracking down anyone who commits an offense against New Yorkers"

Detectives retraced his steps through surveillance video to a single room occupancy hotel at 500 West 42nd street, where he changed his clothes and left town with Vergara, with whom he was staying in Florida.

Law enforcement was reportedly on his tail as he traveled south, and he was spotted Tuesday at a Walmart in Fayetteville, North Carolina buying supplies for his girlfriend's two dogs.

While on the run, police say he altered his appearance by shaving his head.

The 31-year-old allegedly fired his weapon in Times Square this past Saturday while taking aim at his own brother.

"We were all there Saturday night in Times Square where three innocent people were shot senselessly," NYPD Commissioner Dermot Shea said. "While there is no joy today, there is justice."
EMBED More News Videos

Muhammad had been known to frequent Times Square, passing off bootleg CDs, and he has been arrested several times over the last few years.

Mayor Bill de Blasio said he did not believe that shooting is indicative of larger problems.

There are additional officers in the city's 20 largest subway stations in addition to those in and around Times Square, but despite the NYPD's deployment of more highly-trained critical response command officers, Police Commissioner Dermot Shea says he is not convinced more cops would have stopped Saturday's shooting.

"Clearly, deployment is a piece of this equation," he said. "But again, I spoke to one of the officers. He was literally feet away, a block away. He put it (on the radio), responded immediately. You see how many cops were in that area."

All three are out of the hospital and on the road to recovery.

Officer Alyssa Vogel carried the 4-year-old victim to an ambulance after the shooting and spoke out about the incident on "Good Morning America."

The 4-year-old underwent surgery and is now home. Her grandmother expressed gratitude to Eyewitness News that the young girl was already released.

Another victim, 23-year-old tourist Wendy Magrinot spoke to Eyewitness News on the phone and said she thought she was going to die.
EMBED More News Videos

"I was able to run like five steps and I told my mom to take the baby and run," Magrinot said. "I saw a police officer, and I screamed to him, 'I'm shot, I have a 2-year-old. I don't want to die. Pease help me.'"
She also says she has no plans to return to New York City anytime soon.

Gov. Andrew Cuomo said the shooting was "more damaging" because it is higher profile.

"Times Square, high publicity, more people have heard about it," he said. "Times Square is a tourist destination. Times square is iconic New York City. Was it more damaging? Yes, only because it communicated to more people."

"Did it tell the people of New York City anything new?" Cuomo asked. "No, no, that's why this is all a game. You take the subway, you know there is a crime problem. You live in New York City, you watch any newspaper, watch any news show for the past months, you know there is a crime problem. And now it happened in Times Square, that may translate to more tourists, but I don't think it made a difference for New Yorkers."

New York has some of the most stringent gun laws in the country, but Shea says more is needed.