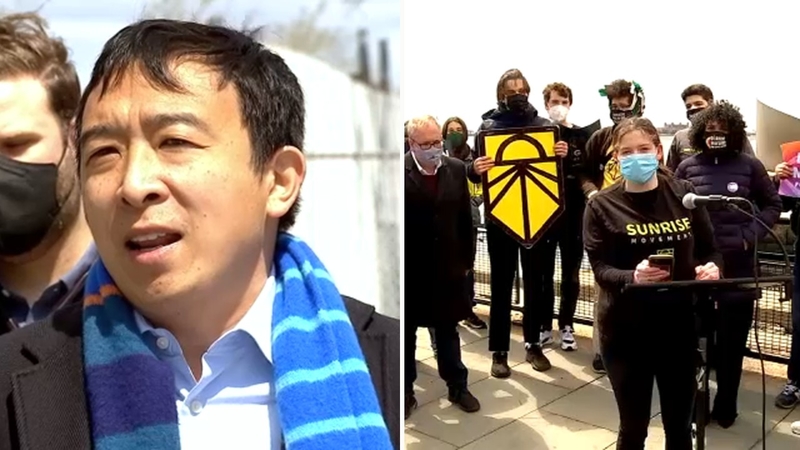 NEW YORK (WABC) -- Andrew Yang is trying to become the first Asian American elected mayor of New York City, but more than 400 self-described progressives have signed a letter against his candidacy.

On Thursday, a group of young environmentalists called the Sunrise Movement endorsed both Scott Stringer and Dianne Morales for mayor.

The two candidates later said they are proud to be called progressive, or even liberal, in their politics.

"My take on that is we're living in radical times and we need radical solutions," Morales said. "We are at a crossroad in our history and this is not the time for any kind of moderation or tinkering."

On Thursday, as a way to reduce crime, he endorsed bringing back a version of the plainclothes anti-crime unit that was disbanded in 2020 for its aggressive policing.

He said he realizes it was controversial, so he wants it back in a new form.

"We need to reinvent the anti-crime plainclothes unit," Adams said. "It is time to bring back the unpredictable aspect of policing. Policing can't continue to be predictable."

Like Adams, Yang is often seen as middle-of-the-road. He said he doesn't like labels such as liberal, progressive or moderate.

"I think I take exception to trying to categorize people in various ideological buckets," Yang said.

But on Thursday the group of 400 Asian and Pacific Islanders printed a letter that they "oppose Yang's bid to be our next mayor."

The group claims Yang has "taken pro-policing stances" and that he isn't progressive enough.

"I think first Asian-Americans are a very diverse community. Obviously people are going to have very different points of view," Yang said.

In the last year, politics in Washington tilted to a more liberal viewpoint.

New York voters must now decide how far to the left they want their next mayor to be.

And they need to decide quickly - there are only eight weeks until primary election day on June 22.

As the race for the 110th mayor of New York City heats up, there is new criticism coming to light of frontrunner Andrew Yang over a video posted to Twitter.