7 On Your Side: Woman claims Apple Watch burned her wrist 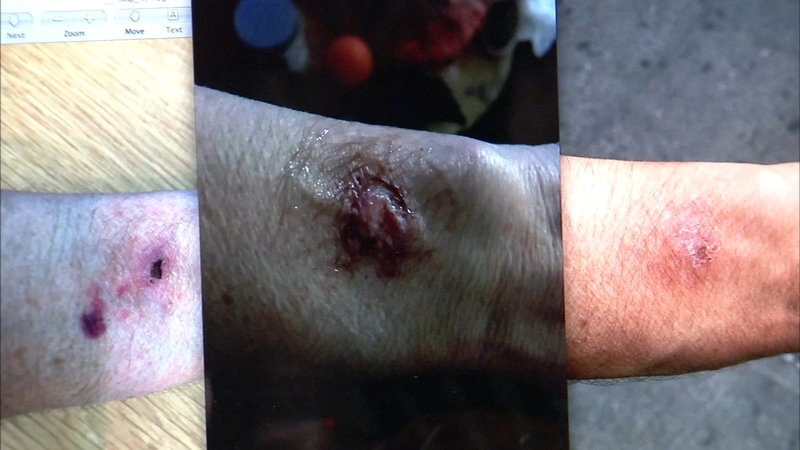 7 On Your Side: Woman claims Apple Watch burned her wrist

NEW YORK (WABC) -- An area musician says her Apple Watch heated up, causing a thermal burn on her wrist.

Rew Starr said she wore the watch for weeks without incident. Then came the mystery. She didn't feel the burn at first, only noticing a dark circle on her wrist. But one night, when she checked the skin under her Apple watch, she couldn't believe her eyes.

"It looked gooey and red and oozing," she said.

It was last June, just a few weeks after she started wearing her new Apple Watch.

"It was messed up, and I screamed, and I think the watch burned me," she said. "This is the back of the watch that had blood all over it when I took it off."

The watch was a gift from her husband and kids last Mother's Day.

"I wore one for two years, and nothing happened," she said. "It's the new one that did this."

Starr said she never slept with the watch on and had been wearing it for about 10 hours that day. She said she went to a doctor, who treated the burn on her wrist. The next morning, she went to the Apple Store.

But as a musician who relies on her wrist to make a living, Starr wasn't satisfied. She asked an Apple rep for an additional $5,000 in compensation.

"(The Apple rep) stuck with me for three months and said, 'It's under investigation. It's with our engineers. It's being investigated, and they're not sure,'" she said.

Apple completed its investigation in September, telling Eyewitness News that when it tested the watch, "it hadn't reached a temperature which would have caused any injury."

"I don't think that's fair," she said. "Why did you string me along like this? Why didn't you just tell me that in the beginning? I went to the doctor, and he said I have a thermal burn."

Starr is also a mother of two, and she said she's worried someone else may get hurt.

"It's a huge company," she said. "And I know I'm a teeny little customer in their big world, and it just didn't seem appropriate that Apple would respond in this way."

The big takeaway is that if you feel you have a defective product, document the injury or property damage with pictures. If you suffer an injury, go to a doctor and compile medical records and receipts for out-of-pocket expenses. And think twice before giving the product back to the store. You could need to have your own expert test it. Starr found out that once you surrender it, it's gone.

As for Starr, she says her next step is a legal one. She's hired an attorney, who is about to file a lawsuit against Apple. We'll keep you posted.

At Apple, customer safety is our top priority. After receiving the customer's Apple Watch, while our tests determined that it had not reached a temperature which would have caused any injury, we provided a full refund.

Send us your questions, issues, and story ideas to by filling out the form above, by emailing 7OnYourSideNina@abc.com, or contact Nina on her Facebook page or tweet her at Twitter @7OnYourSideNY! You can also call the 7 On Your Side Hotline at 917-260-7697.
Report a correction or typo
Related topics:
technologyapple watchapple7 on your sideburn injuries
Copyright © 2022 WABC-TV. All Rights Reserved.
7 ON YOUR SIDE
Baby formula scams are skyrocketing: How to avoid getting duped
United cancels couple's flight, charges $4K more for same seats
529 Plans - How they can help you save/pay for college
7 On Your Side helps grieving mom fight for daughter's death benefits
TOP STORIES
Police release photos of suspected gunman in Q train fatal shooting
3 women killed by alleged drunken driver after leaving Sweet 16 party
Boy Scout suffers minor injuries in bear attack at NY campsite
AccuWeather: Sun and clouds, breezy and cooler
MLB suspends Yanks' Donaldson for 1 game for 'Jackie' remark
19-year-old attacked by hatchet-wielding suspect in Flatiron District
Father puts 1,000 miles on his car to find specialty formula
Show More
Coast Guard, NYPD, FDNY demonstrate boating safety ahead of holiday
Last public pay phone in NYC removed from streets
Alleged scooter driver surrenders in stray bullet death of 11-year-old
Nurses, techs at NJ hospital stage strike over working conditions
15 arrested after NJ pop-up party that sparked 9 p.m. curfew
More TOP STORIES News