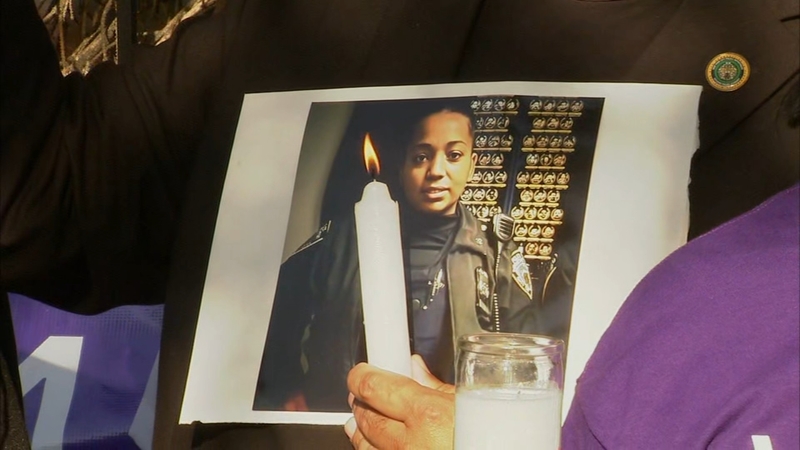 INWOOD, Manhattan (WABC) -- Family, friends and fellow officers gathered in Upper Manhattan Thursday to bid a final farewell to an NYPD officer who investigators say was stabbed to death by her estranged husband in the Bronx.

Funeral services were held for Officer Arianna Reyes-Gomez, who was remembered as someone who bravely protected the public.

It was an emotional scene at the Riverdale Funeral Home as colleagues made their way inside.

A detective wrote in court documents that surveillance footage captured the defendant struggle with Reyes-Gomez at her door before he pushed himself into her apartment and emerge approximately one minute later holding a knife and leaving a bloody footprint."

A candlelight vigil outside the apartment Wednesday night attracted fellow domestic violence victims, along with friends and family.

One officer was fighting back tears, while Reyes-Gomez's sister Julissa found the strength to talk about her sister.

"Her heart is broken," a translator said, as Julissa spoke in Spanish. "She loved her sister. She was very much loved by her sister, and that is what she is going to miss the most. Her affection and sincerity as a woman and a sister for her."

Baez surrendered to police and is charged with murder, manslaughter, and criminal possession of a weapon.

Officer Reyes-Gomez was assigned to patrol the subway and recently commended for saving a man from an overdose.