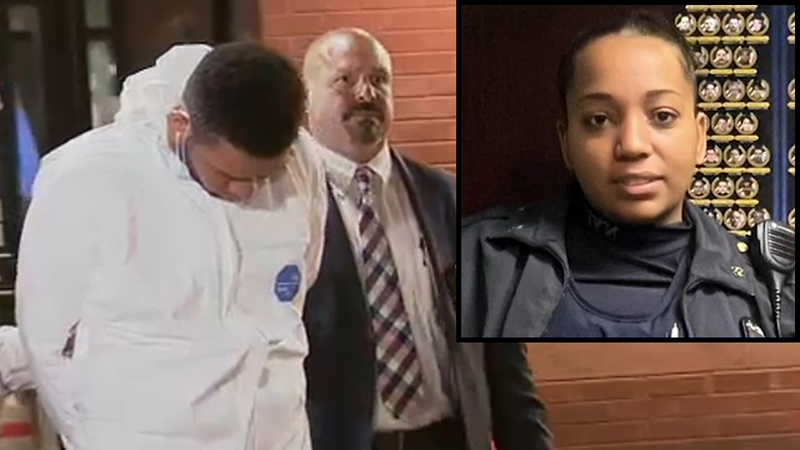 MELROSE, Bronx (WABC) -- The estranged husband of an off-duty NYPD officer who was stabbed to death in the Bronx was charged with murder after a court appearance Tuesday night.

It comes after police say 31-year-old Officer Arianna Reyes-Gomez, who worked as an NYPD officer assigned to Transit in Brooklyn, was discovered dead with multiple stab wounds around 2:50 a.m. Monday.

34-year-old Argenis Baez was arrested and charged with murder after 31-year-old off-duty NYPD officer Arianna Reyes-Gomez was stabbed to death in the Bronx.

Neighbors said they heard the argument.

However, they didn't realize that it was more than just loud voices, and instead, turned to physical deadly violence.

Baez was walked out of a police precinct in the Bronx Monday night and appeared in court Tuesday evening.

While estranged, police say there were no prior domestic calls from this couple.

Police say he stabbed and killed Officer Arianna Reyes-Gomez, 31, while she was off-duty at her home.

It happened inside an apartment on Grand Concourse, and authorities say Reyes-Gomez managed to call a relative before she died.

The officer and the suspect share a 3-year-old son who was with a relative when the incident happened.

Officer Reyes-Gomez has been with the NYPD since 2019 and she was assigned to the Transit Bureau in Brooklyn.

"Today, we mourn. Our hearts are heavy as we investigate the tragic murder of an NYPD officer who was off-duty last night in the Bronx. We're here for her loved ones, her fellow cops - and to ensure the person responsible is brought to justice."

The couple's 3-year-old is very likely facing a life without either parent now.