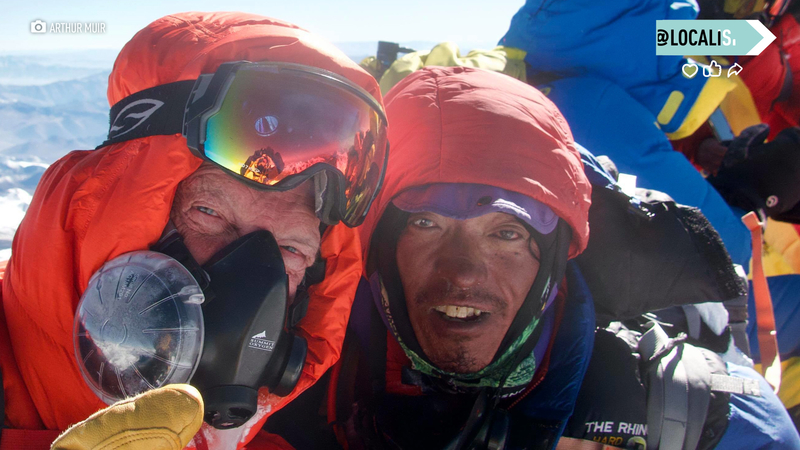 CHICAGO, Ill. -- A 75-year-old from the suburbs of Chicago just became the oldest American to summit Mount Everest.

Mountaineer Arthur Muir, from Northbrook, Illinois, trained for about two years. He said his extreme adventure made him feel young!

"When I'm spending 60 days with people, you know, I don't have a mirror, so I can't see what I look like. I feel like I'm 55 because I can't see myself. Then at the end, I look in the mirror and say, 'Oh yes, you are 75.' But you forget when you're with people doing all this stuff."

Muir said conquering Everest has been a goal of his since meeting Jim Whittaker, the first American to climb the famous mountain.

"So here's the very first American to climb Mount Everest and he came to our school. So I was in high school, age 18, I guess, something like that. And I just never forgot about it."

Muir began mountaineering at the age of 68. In 2019, the 75-year-old attempted to climb Mount Everest but did not achieve his goal as he suffered an ankle injury. Through it all, he said his family was his motivating force.

"If you love someone and they have a dream, and it's a possibility, why in the world would you ever say no," said Muri's wife, Leslie.

Muir said he felt relieved, happiness and a sense of euphoria when he made it down from the mountain. He was accompanied by a team of 30 mountaineers. Muir said he's not done adventuring and is in the process of planning his next challenge.
Report a correction or typo
Related topics:
northbrookchicagorecordmt. everestlocalishwls
LOCALISH
Dine where David Bowie, The Foo Fighters and No Doubt once recorded hit songs
Brothless Ramen Dish Satisfies Your Cravings
A healing refuge for SF's Tenderloin neighborhood
This NJ shop serves a pretzel cheesesteak that's a must-try!
TOP STORIES
Meat Loaf, 'Bat Out of Hell' rock superstar, dies at 74
Burglary suspect who fired at police in Bronx was out on bond
CDC says omicron in NYC wastewater before reported in South Africa
Watch NatGeo documentary 'The First Wave' free for 48 hours
7 On Your Side: Tips for ordering your at-home COVID tests safely
AccuWeather: Frigid Friday
Livery driver stabbed and carjacked in Bronx
Show More
COVID Updates: 2 companies accused of COVID testing fraud
18-year-old taking groceries to grandma killed by stray bullet in NJ
10-year-old child struck by vehicle in Queens; Driver in custody
FDNY, NYPD perform water rescue saving two children from frozen pond
Teachers union says LI district not enforcing mask mandate
More TOP STORIES News