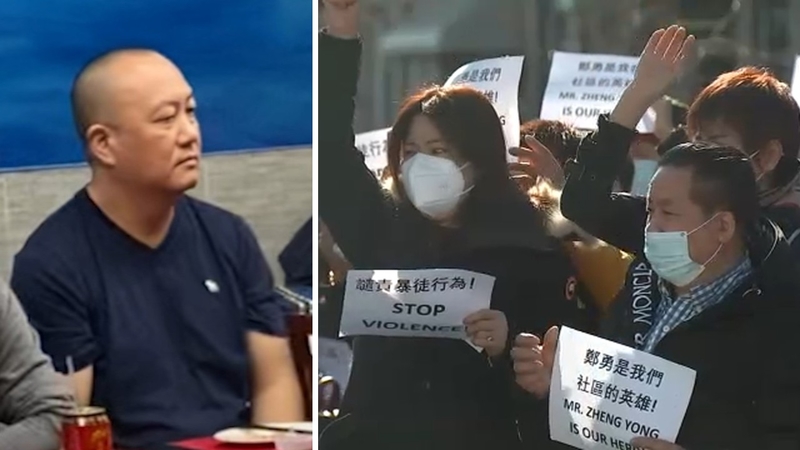 SUNSET PARK, Brooklyn (WABC) -- Hundreds gathered for a vigil Wednesday afternoon to rally against the disturbing rise in attacks on Asian Americans in New York and across the country.

Anger and sadness and grief and disbelief filled the air as the group came together to condemn the murder of 46-year-old Yong Zheng.

The would-be good Samaritan is now hailed as a hero in the community.

"We call Mr. Zheng our community hero," Lina Chen said. "So we want to let people know, stop the violence."

Zheng was returning home when he saw groups of men fighting in the street. Believing an innocent Asian man was being attacked, he and a friend tried to intervene.

Detectives say surveillance video shows he tried to save the man and was stabbed to death with a screwdriver. It happened at 9:30 on Friday night.

The heartbroken widow of the Good Samaritan who died during a stabbing outside an underground gambling den in Brooklyn is speaking out.

As Zheng's 4-year-old son wiped away his mother's tears, Zheng's widow told Eyewitness News the crime has left her devastated.
"He heard robbery, he didn't know what was going on, he saw a crime and he tried to stop it," his widow, Jin Zhao, said through a translator.

But it was not a bias attack, after all. It was an armed robbery outside an illegal gambling hall.

Police later arrested an ex-con from Brownsville who had once served time for another killing.

Zheng's friend, who also intervened, was injured but has since been released from the hospital.

While one of the suspects is in custody, detectives are still seeking several accomplices. Anybody with information that could track them down is urged to call the NYPD.

The 45-year-old man arrested is expected to be officially charged in the fatal stabbing, and stabbing attack on three other men.