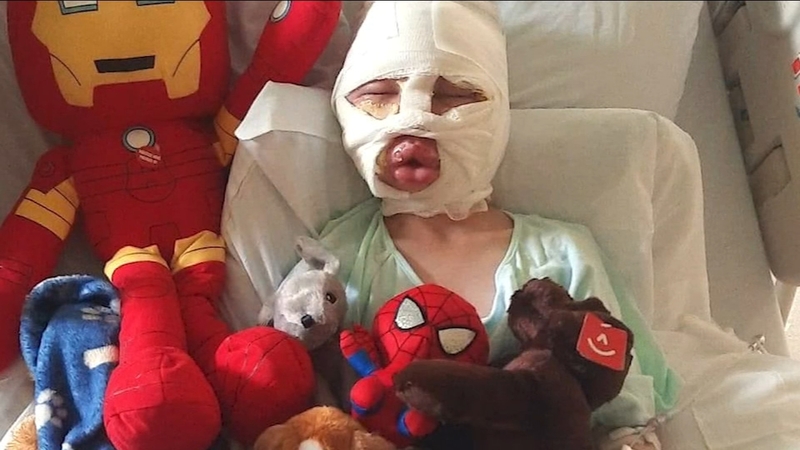 BRIDGEPORT, Connecticut (WABC) -- A 6-year-old boy was hospitalized in Connecticut with severe burns to his face and leg, which his parents said were the result of bullying.

"My 6-year-old son looked at me, and he said, 'Daddy, he poured gasoline on a ball, and he threw it directly into my face, and he caught my face on fire with a fireball,'" the boy's father, Aaron Krankall, said.

The incident happened Sunday afternoon. Dominick Krankall was playing in the backyard with the 8- and 11-year-old sons of the family that owns the house on Louisiana Avenue, in which the Krankalls rent an apartment.

"I heard him screaming, 'Mommy help me, they set me on fire,'" mom Maria Rua said.

"There was no bullying whatsoever involved, none," she said.

Giacobbe said Rua had agreed to keep an eye on the boys while she went out. At some point, a gas can was taken from a shed and a tennis ball was set on fire.

But Rua says her son wasn't playing with fire and instead was the victim of bullying.

"My son has been bullied by this child for a year," she said. "That day, they purposefully threw a gasoline-saturated ball that they lit on fire at my son's face. They called his name so he would turn around. They threw it at Dominick and left him outside alone to die."

She says Dominick suffered second and third-degree burns to his face and leg.

"His face is about twice the size it normally is," Rua said. "He's swollen with blisters. You can't even see his beautiful eyes anymore."

His father said that last month, Dominick suffered a concussion after being pushed by the same 8-year-old child.

"They can go outside, they'll be playing basketball for 5 or 10 minutes, and everything seems grand," Aaron Krankall said. "And then maybe 10, 15 minutes goes by and someone gets pushed, someone gets tripped, someone gets hurt. And this has been going on and on, and I am so sick of it...I will not stop, though, until this kid gets put away because this is not OK. I need justice for my son."

The funeral for fallen FDNY Firefighter Timothy Klein will take place on Friday in Belle Harbor, Queens. Lucy Yang has more on the firefighter's impact on the people who knew him well.

There is a security camera that overlooks that backyard, and part of this incident was captured on surveillance video that police are reviewing as their investigation continues.

"He's a strong boy though, he's coping," Rua said. "For what he's going through, watching him have to get those bandages off and his face scraped, is painful for him and it's painful for me to watch that and it's not fair to him."

Rua said her son should make a full recovery and have minimal scarring.