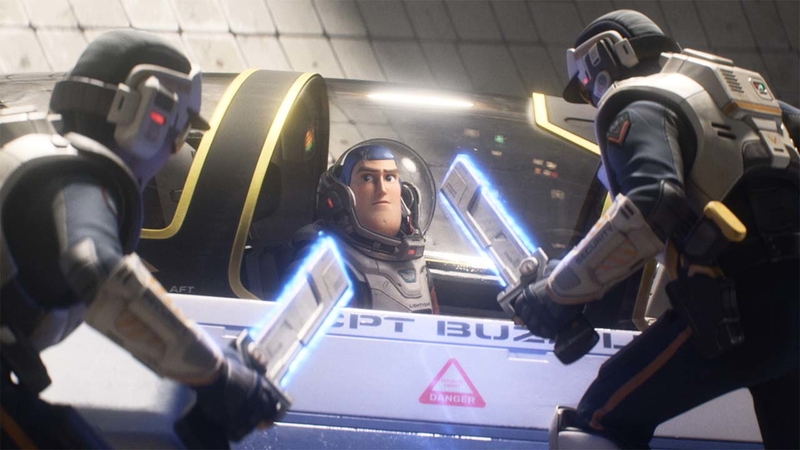 In a new clip from the upcoming Disney-Pixar film "Lightyear," Space Ranger Buzz Lightyear (Chris Evans) and his robot companion Sox (Peter Sohn) must defy their superiors to perform a daring unauthorized takeoff in the XL-15 spacecraft. It's all part of Lightyear's mission to get himself and his crew home after they find themselves stranded on T'Kani Prime, a swampy, hostile planet crawling with giant swarming bugs that also happens to be millions of light-years away from Earth.

Watch the clip, which premiered on On The Red Carpet, in the video player above.

In the film, Lightyear's quest to develop a new fuel source for his marooned spacecraft is made more difficult by the arrival of Zurg, who is described as "an imposing presence with an army of ruthless robots and a mysterious agenda."

"Lightyear" tells the origin story of the Space Ranger who inspired the beloved "Toy Story" character. The cast also features the voices of Uzo Aduba as Lightyear's commander Alisha Hawthorne and Keke Palmer, Dale Soules and Taika Waititi as Lightyear's recruits. It was directed by Angus MacLane, a 25-year Pixar veteran who co-directed "Finding Dory" and also worked on "Toy Story 2," "Monsters, Inc.," "The Incredibles," "WALL-E"," and more.

"It's a film that celebrates that feeling you would get watching the sci-fi movies of the late '70s and early '80s," MacLane told "Good Morning America" in an interview last year. "That's really the goal of it is making a fun ride that is emotionally satisfying but also fun to watch and to rewatch."

When Disney-Pixar's "Lightyear" premiere took over Hollywood, it also served as a first time meet-and-greet for several of the stars of the animated adventure.