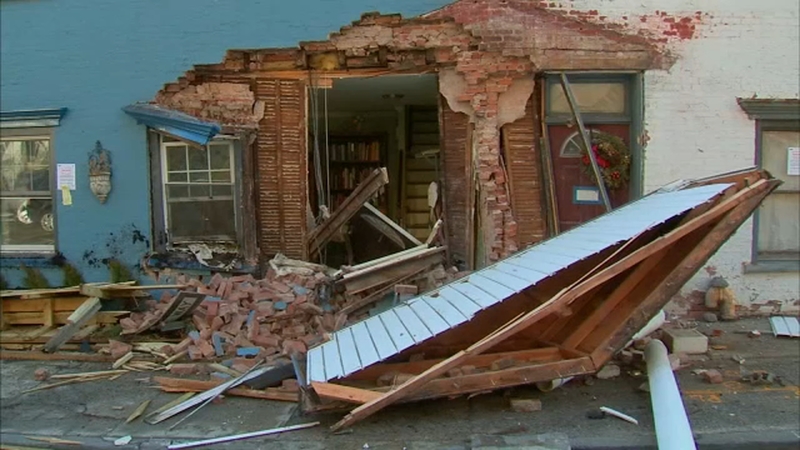 Debris littered the street after the crash, which happened on Van Duzer Street in the Stapleton section just after 3:30 a.m.

The whole thing was caught on a neighbor's Ring camera, showing the car speeding up the street, losing control, and slamming into entrance of the building, which then collapses.

A police cruiser quickly pulls up on the scene, and the driver, 38-year-old Michael Robles, was taken into custody.

Authorities say Robles was initially pulled over for having a defective brake light on his 2007 Jeep Patriot, but that officers apparently spotted a crack pipe in the vehicle.

Robles took off, police said, eventually colliding with another vehicle and careening into the home.

"The whole house shook and it literally felt like someone was dumping a ton of bricks," homeowner Phillip Sanders said.

Nine people in the two homes were displaced after inspectors deemed the home uninhabitable.

Micaela Rodriguez' mother was sleeping in the first floor of the home at the time of the crash.

"3:30 I was sleeping in the basement, my mom, though, she was sleeping right here on the first floor," she said. "We open up the sofa bed for the first time in years, because we wanted our grandparents to have her bedroom. Her head was literally a foot away from where the car crashed."

Rodriguez is visiting from college while her grandparents are visiting from Mexico, and there were six people in their house at the time of impact.

The Department of Buildings issued full vacate orders for the homes.

Police say Robles did not have a valid license and that the Jeep was unregistered, and that officers recovered ecstasy, heroin, and the suspected crack pipe.

He is charged with reckless endangerment, fleeing an officer in a motor vehicle, criminal possession of a controlled substance, aggravated unlicensed operator of a motor vehicle, equipment violation for a defective brake light, driving without a license, and operating an unregistered vehicle.