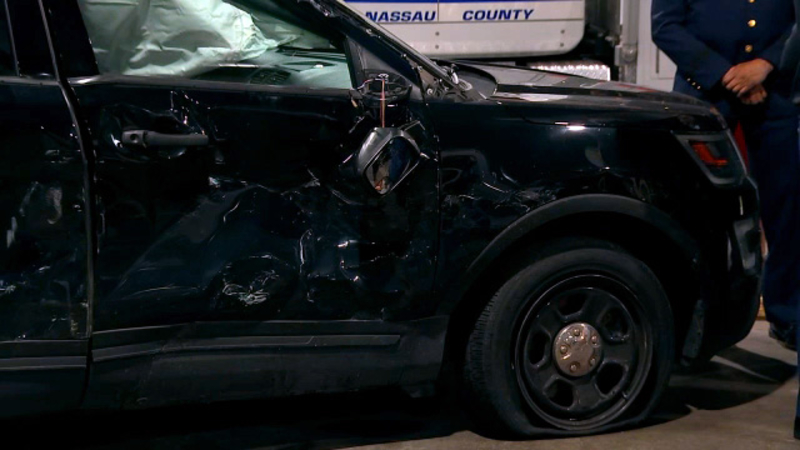 NORTH BELLMORE, Long Island (WABC) -- Three teenagers are under arrest on Long Island after, authorities say, they stole a car and then rammed it into police vehicles while attempting to flee a traffic stop.

Nassau County police say the suspects injured several officers and caused a half a million dollars in damage to the vehicles.

Authorities say officers spotted the vehicle, which was reported stolen in Roslyn, and attempted to pull it over, but the 16-year-old driver refused to comply.

Multiple police vehicles were struck by the defendant before he was finally stopped on the Long Island Expressway and placed under arrest, police said.

One detective suffered a concussion, while the other suffered cervical pain.

A loaded firearm was also recovered in the Mercedes.

"These were three individuals, one was 17, two of them were 16, all three were from New Jersey," he said. "They came to New York from New Jersey because of the liberal, progressive policies that have made New York state a less safe place to live in, with cashless bail and Raise the Age."

Raise the Age refers to New York raising the age of criminal responsibility to 18, which state officials say ensures that young people who commit nonviolent crimes receive the intervention and evidence-based treatment rather than going to prison.

Two of the suspects have already been released, while the third remains behind bars due to a warrant in New Jersey.

Officials highlighted another incident in urging residents not to leave their vehicles running, unlocked, or with the key fob inside.

A 35-year-old man left his BMW running at a BP gas station in Syosset just before 5 a.m. Tuesday and had a suspect hop into the driver's seat and speed away.

This is why you should NEVER leave your key fob in your car. As soon as the driver gets out to pay for gas..the thief gets in! Syosset, Long Island this morning. Car thefts are exploding. We’ll have more today on @ABC7NY @NassauCountyPD pic.twitter.com/Y3vyBvYawZ

All three vehicles fled the scene following the car theft.

No injuries were reported, and the investigation continues.

Detectives request anyone with information regarding this crime to contact Nassau County Crime Stoppers at 1-800-244-TIPS or call 911. All callers will remain anonymous.