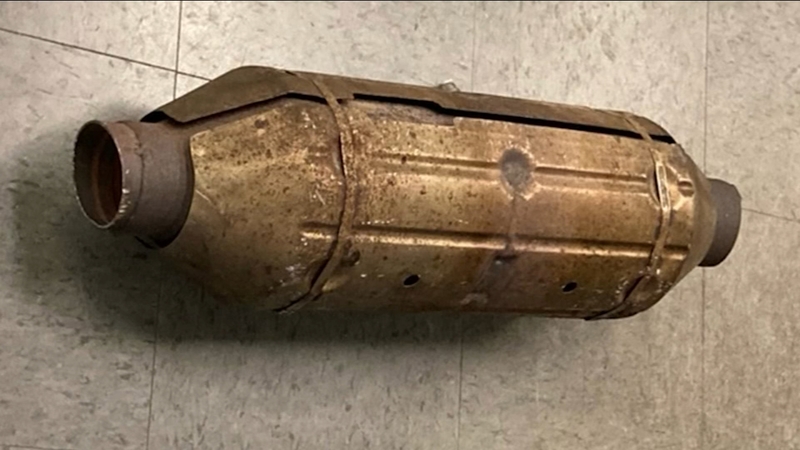 NEW YORK CITY (WABC) -- A surging number of thefts of increasingly valuable catalytic converters has prompted the NYPD to come up with a possible solution -- a way to track the pricy car parts so that stolen ones cannot be resold on the open market.

The car parts, made of precious metals, have become more valuable as the pandemic cut on production at mines overseas.

The result is that the NYPD is tracking skyrocketing numbers of thefts of catalytic converters, which can cost more than $2,000 to replace.

"How long does it take someone to cut this out?" Detective Thomas Burke said. "Minutes, if you know what you're doing, a couple of minutes."

Burke is with the NYPD'S Auto Crime Unit.

There are several grams inside the device, and that's fueling a tidal wave of thefts nationwide.

In New York City this year, the NYPD is reporting a 361% increase compared to the same time last year. And in just the past week, an astonishing 446% increase.

Faced with the theft spree, the NYPD has looked internally to its renowned Fleet Services Division to come up with a way to track the stolen parts and potentially stop their sale on the resale market.

There's now a kit with a sticker and a serial number, which is as unique as a fingerprint. It's put on the box and will become permanently etched in the metal as the converter heats up.

All the information is put in a database and linked to the VIN number.

"This is what's going to get them, and they'll be surprised when they see this," Burke said.

If it's scratched off, it will be a red flag back at the scrap yard.

"'Hey listen, why would I accept this?'" Burke said. "'You ground the numbers off. The cops are going to going to look me up.'"

Police are working with car dealers and manufacturers to offer the extra layer of protection at no cost.

The initiative was funded by the Police Foundation.

The NYPD also has some tips on how to avoid the theft of catalytic converters.

First, park your vehicle in a secure garage if you have access to one.

If you don't have access to a garage, park in a well-lit or well-populated area.

Also consider buying a device, best described as a metal cage, that installs over the catalytic converter to make it more difficult to steal.