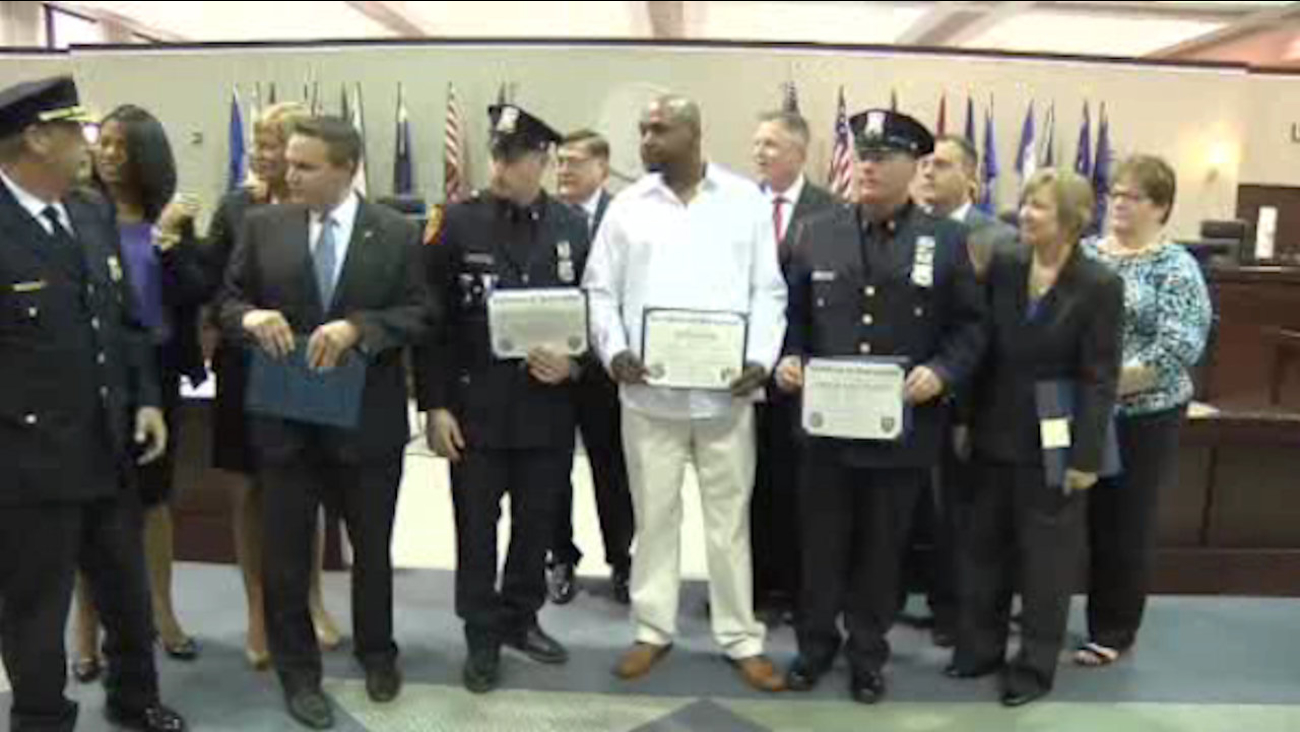 CENTEREACH, N.Y. (WABC) -- A neighbor who saved his neighbors as their home raged in an inferno earlier this month was honored for his brave actions on Thursday night in Centereach.

Suddenly surrounded by intense smoke and flames in the middle of the night James Donnelly could only think of his longtime wife trapped in an upstairs bedroom.

"I blasted out that window, I climbed out onto the roof, and I kept on screaming 'fire, fire fire!'" said Donnelly.

Thankfully, his desperate cries for help didn't fall on deaf ears with neighbor Thomas Earl immediately springing into action with his own ladder.

"There was so much smoke, I really couldn't see her, but I seen her hand and she walked a little towards me," said Earl, "I grabbed her, and she stuck her head out again."

Earl climbed more than 20 feet to the second floor to coax his terrified neighbor to safety and he finally embraced her in his arms.

Earl says he maneuvered his body so he could take the brunt of the fall, and he would do it all again without a second thought.

"It's something that everyone should do if you see someone in trouble - you go help. I don't care if they're white, black, purple - it doesn't matter. If somebody is in need, you help," said Earl.

A great deal of damage now remains at the Donnelly's home, but they hope to restore and rebuild it, so they can remain neighbors with Mr. Earl, who has changed their lives forever.

"Special thanks to my wife Kenya Earl, my family, and Oliver Velez for his support," Earl said.

He added Thursday night that he has spoken to the woman and she is doing well.

Also there's a fund that's been set up for the Donnelly family at Holy Cross Lutheran in Ronkonkoma, as well as on Facebook called the Donnelly Family Fund: https://www.facebook.com/donnellyfamilyfund?fref=ts