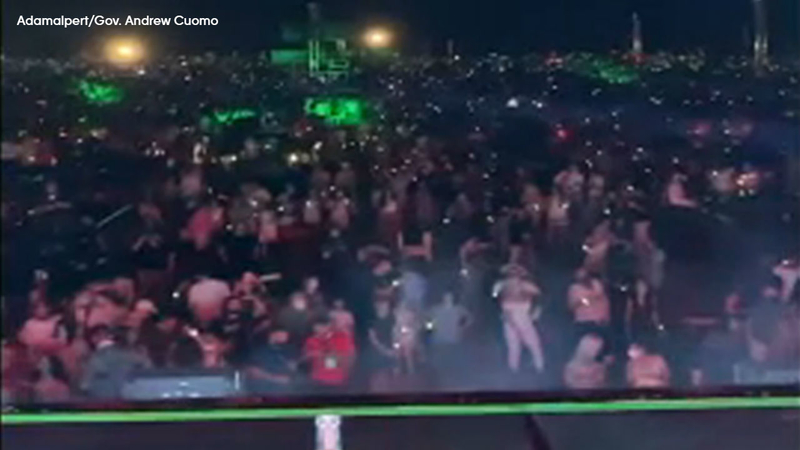 SOUTHAMPTON, Suffolk County (WABC) -- Governor Andrew Cuomo is lashing out after video showed a massive crowds gathered in front of the stage at a Chainsmokers concert in the Hamptons.

Cuomo said he was appalled at the scene and confirmed the state Department of Health will conduct an investigation into "egregious social distancing violations."

"We have no tolerance for the illegal reckless endangerment of public health," Cuomo wrote on Twitter.

Cuomo shared a social media video, which has over 6 million views, that showed crowds of people standing and swaying near the stage. The video shows attendees who appeared to be wearing masks, but many individuals were standing closer than 6 feet.

Videos from a concert held in Southampton on Saturday show egregious social distancing violations. I am appalled.

The Department of Health will conduct an investigation.

We have no tolerance for the illegal & reckless endangerment of public health.pic.twitter.com/gf9kggdo8w

"Drive-ins are drive-ins," Cuomo said during his teleconference call Tuesday. "You are in your car, you drive in, you stay in your car and you watch the concert, like drive-in movies. I'm old enough to remember them. That is not what the concert was in the Hamptons."

Secretary to the Governor, Melissa de Rosa, reiterated the 50% cap on mass gatherings still exists, and it's socially distanced for different regions of the state that are in phase 4. Drive-in movie theaters are still allowed.

"It's a nice thing to be able to go outside, but obviously what we saw over the weekend was not a drive-in movie theater," she said. "So if similar things are happening in the state, they should see what happened in the Hamptons and be forewarned."

Cuomo said the state is taking the incident very seriously and added that both the town and village of Southampton are now open to facing criminal violations.

Suffolk County Executive Steve Bellone said on Tuesday he is concerned anytime he sees gatherings with people without face coverings. He said we need to learn from each of the cases.

Bellone said he is not sure the event should have been issued a permit and he wants to make sure events do not have similar violations in the future.

Schneiderman told Eyewitness News the organizer of the event violated the terms of the permit by allowing people to congregate in front of the stage.

"That was not part of the permit," he said. "We would never have allowed that."

Schneiderman said the town has cited the organizer for violating the permit.

"I have asked the organizer to identify the people who they allowed in that pit area, so they can all be tested to see if anyone is positive for COVID-19," he said.

Schneiderman's band performed as an opening act at the concert, and he said when he performed, no one was in the front area of the stage.

"I never would have personally participated in an event if I had any sense that the organizer would violate the conditions of the permit," he said.

Schneiderman said the organizer could face additional citations because while the permit called for 2,000 guests, it appeared nearly 3,000 were in attendance.

Officials with the Town of Southampton Police Department are considering issuing citations as well for violations of the governor's social distancing executive order.

A representative for the event organizer responded to Eyewitness News reporter Kristin Thorne with the following statement detailing the protocols that were in place for the event:

The Safe & Sound drive-in concert fundraiser followed the guidelines created by the Centers for Disease Control and Prevention and made best efforts to ensure New York's social distancing guidelines were properly maintained throughout the event," the statement read. "We collaborated with all state and local health officials to keep everyone safe, create awareness for local businesses, provide work to over 350 people who have been unemployed as a result of the pandemic and to bring some joy into people's lives during these difficult times. The event also raised money for No Kid Hungry, Southampton Fresh Air Home and Children's Medical Fund of New York. Prior to the event, all guests were instructed to self-monitor their temperature daily for two weeks leading up to the event, maintaining a temperature below 99.5 F (37.5 C). Additionally, they were asked to disclose if they tested positive for COVID-19 or if they were in contact with anyone who tested positive within the last two weeks. Upon arrival, individuals within each car had their temperatures taken and were also provided complimentary face masks before driving to their designated 20' x 20' spot.

Guests were also instructed that they would not be allowed to leave their designed spots for any reason other than to use the restroom facilities. Announcements and reminders were made every 30 minutes from the main stage, and security guards regularly patrolled the area to encourage mask wearing and promote social distancing guidelines. The event organizers followed all proper and current protocol, including spacing each spot more than six feet apart, positioning sanitizing stations throughout the open grounds, temperature checks for all attendees, sanitization of restrooms every 10 minutes, local security enforcing guests to wear their masks both in and out of their designated areas, contact tracing, clearly marked parking zones, as well as providing complimentary face masks upon arrival.

Listed below are a few facts as to what was put into place and enforced throughout the event.

--108 20' x 20' areas and 393 20' x 15' areas were created for guests to experience with family or friends and enjoy a show in their respective area.
--With this being one of the first events of the summer, guests were very excited to get out of their homes and have a great night.
--As event organizers, limited gatherings of 10 people using ample amounts of security (over 80 guards total) who were enforcing social distancing guidelines as well as making sure that guests wore masks when outside of personal areas.
--4,000 masks handed out to guests for free
--The criticism based on a two second video does not accurately depict the entire event. This video is misleading based on the angle and the lighting in which it was shot. The clip shows footage of the Chainsmokers friends and family section, which was separated by stanchions and metal barricades, each section limited to no more than 10 people max.
--Temperature checks were done onsite before guests were allowed to enter
--Covid waivers were signed by all guests in attendance and all staff prior to entering into venue
--350 jobs were created for the local community
--Over 100 CDC guidelines posted around venue and on screens during the show
--Over 80 security guards (including the Southampton police department)
--10,000 individual hand sanitizers supplied to guests for free
--Hand washing stations for staff at bathrooms and backstage
--No on-site concessions so people wouldn't have communal food
--Four bathrooms attendants per bathroom trailer
--Bathrooms were cleaned every 10 minutes
--12 portable bathrooms each with its own attendant all placed 6 feet apart with hand sanitizer stations before leaving.
--Security was fully masked and constantly reminding guests to put on their masks if they were out of there reserved area
--NO injuries, NO negligence onsite, and NO citations or violations

Below is the letter from NY State Commissioner of Health Dr. Howard Zucker:

I am sure that you are aware the State of New York is in a Declared State of Emergency, since March 7, 2020 due to the prevalence of COVID-19. I know you are aware of the many efforts this state has made in conjunction with many local governments to combat it. The Governor's Executive Orders require social distancing as well as limitations on businesses and other activities, for instance, no non-essential gathering is permitted in excess of fifty individuals, per Executive Order 202.53 until August 20, 2020.

As Commissioner of Health, I have also issued a number of health regulations and emergency orders to safeguard the public health and reduce the spread of COVID-19.

In that regard I am greatly disturbed by reports concerning the "drive-in" concert held in your town this past weekend, which apparently involved thousands of people in close proximity, out of their vehicles, a VIP area where there was no pretense of a vehicle, and generally not adhering to social distancing guidance. I am at a loss as to how the Town of Southampton could have issued a permit for such an event, how they believed it was legal and not an obvious public health threat.

Please report to me within 24 hours on the following:

- Did the town issue a permit for the concert?

- If the permit was issued, how was the permit consistent with applicable state regulations and laws relative to COVID-19?

- If there was a permit issued, what security presence did you have planned for the concert?

- What town officials were at the concert and why was it allowed to continue when it became clear violations were rampant?

Please be advised that all responses to these questions, are a submission to a state department conducting an investigation, and any submission will be deemed to be a sworn statement.

The Southampton Town Attorney sent a reply back to Commissioner Zucker on behalf of the Town Supervisor and said the town issued a special event permit for the event and said the following protocols were followed:

"PPE was provided to all guests including a mask to be worn when leaving their area to use a restroom. In addition, hand washing and sanitizing stations were required in all rows and 2 dedicated security guards per row were assigned to enforce all rules. Additional measures were taken including: signage concerning social distancing, temperature taking, parking markings ensuring appropriate distancing of vehicles, monitoring of all the aforementioned by not less than 64 private security personnel required to be hired by the event holder."

The letter went on to say that it wasn't until later in the evening that town officials noticed possible permit violations occurring in an area immediately in front of the stage.

"There was no reference to such an area in the permit application and the Town did not approve any such gathering space. Once violations became apparent, corrective measures, including requesting organizers to address the situation and the Police Department engaging in efforts to orderly disperse the crowd took place," the letter said.