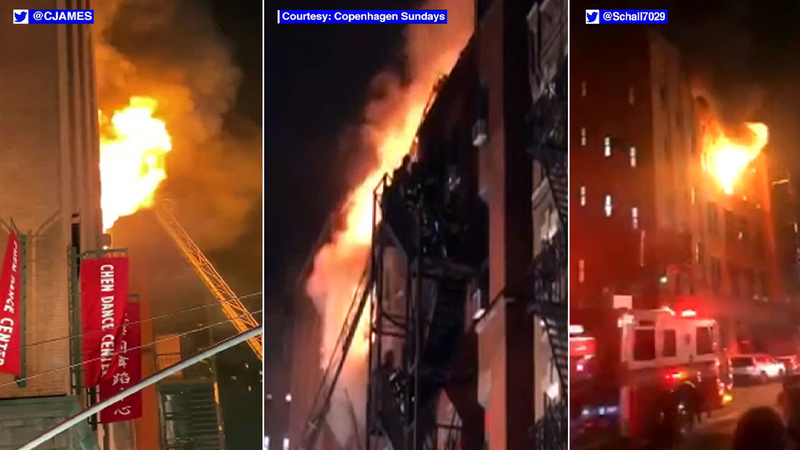 CHINATOWN, Manhattan (WABC) -- A massive fire ripped through a historic building in Chinatown just days before the celebration of the Lunar New Year.

The FDNY says nine people were hurt, including eight firefighters.

Video showed flames pouring out of the fourth floor windows of the building after someone noticed the fire around 8:45 p.m. Thursday at Mulberry and Bayard streets. It then engulfed the fifth floor and swallowed the roof, ripping the heart out of Chinatown.

"At the height of fire, we had 200 fire and EMS personnel on scene," FDNY Chief of Fire Operations Thomas Richardson said. "The fire originally started on the fourth floor of the building. It spread to the fifth floor and then into the roof area."

Crews say there was a 59-year-old man trapped on the top floor, and they had to use ladder trucks to pull him from the building.

He suffered smoke inhalation and was taken to the Cornell Burn Unit at New York Presbyterian Hospital.

The other eight victims were firefighters, and all the injuries -- including those to the civilian -- are said to be non-life-threatening.

At one point, fire crews fighting the flames from inside the building had to back out due to structural concerns.

"One section of the roof did collapse completely," Richardson said. "We are always concerned about the structural stability of the remaining wall, so we are monitoring. Department of Buildings will respond later today to do an evaluation."

The building, which is owned by the city, houses a senior center, job training center, dance studio, the United East Athletics Association, and space for archives for MOCA, the Museum of Chinese in America.

Museum officials said its archives were in the building, and there are countless irreplaceable historical artifacts and photographs now feared to have been lost.

"This is not just the story of Chinatown, this is a story of Chinese immigration to this country," museum President Nancy Yao Maasbach said. "And what we have been striving to do is tell these stories, because they're not in US textbooks."

The building is described as a "cornerstone to Chinatown."

"It is in the heart of Chinatown here on Bayard and Mulberry," FDNY Commissioner Daniel Nigro said. "And I understand it was just recently renovated, maybe a year ago."

Firefighters were still putting out pockets of fire in the building Friday morning, and five tower ladders were set up to handle the task.

Crews had still not accessed the fifth floor due concerns over the structural integrity of the building.

The community is devastated, and many people were anxious to know how much the fire damaged inside.

There is undoubtedly water damage, judging by the amount of water crews continued to pour on fire early Friday morning.

The cause of the fire is under investigation, but there is no criminality suspected at this time.