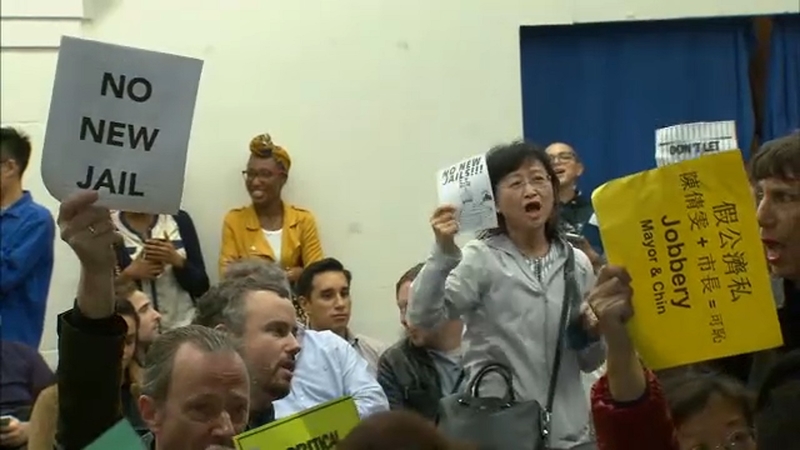 CHINATOWN, Manhattan (WABC) -- There was anger in Chinatown on Thursday night over the city's plan to put a so-called community jail there - one of several that will eventually replace the infamous Rikers Island. The complaint is that there are already too many criminal justice facilities in Lower Manhattan.

Hundreds packed the room during a public meeting held by the mayor's office. More than a hundred more were kept outside, because the room was filled to capacity.

Officials from the mayor's office tried to present their plan for the community jail - it didn't go so well.

The proposed site for the jail is 80 Centre Street - currently home to the city's marriage bureau and offices for the Manhattan DA.

The proposal reportedly calls for a towering 40 story complex. It's all part of Mayor de Blasio's plan to shut down the violence-plagued Rikers Island.

Renderings of the proposed jail released by the mayor's office show a mixed use space with retail on the ground level.

In a statement, the mayor's office said,

"We deeply value the community's responses and look forward to a thorough engagement process. After the scoping meetings there will be more engagement to come."

"The administration has not been transparent at all during the last two scoping hearings," says community activist Karlin Chan.

Residents say their neighborhood is already home to the highest number of courthouses and jails.

"We've had enough. We can't do it anymore," says Chinatown resident Jan Lee.

"Good jails are horizontal jails - they're not vertical jails," he said.