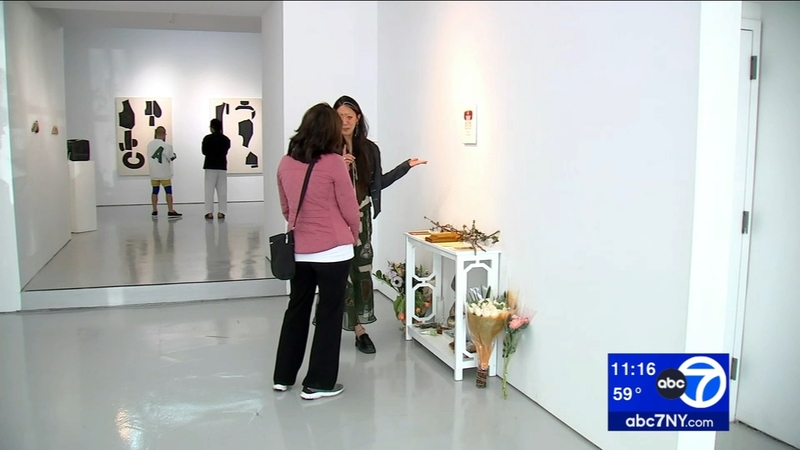 WEST VILLAGE, Manhattan (WABC) -- A young woman tragically lost her life in February after a man followed her into her apartment and stabbed her 40 times.

But those that knew Christina Yuna Lee are choosing to remember her in a way that honors her creative spirit.

"Christina had a love for art," Lee's former employer Eli Klein said. "Art was a huge part of her life."

Klein is honoring his former employee and close friend by displaying her art in an exhibit in his West Village Gallery.

"Christina was an enormously creative person, a passionate person," Klein said. "She painted me a realistic painting of pack of Golden Bridge cigarettes. It's a very personal painting."

The ones Lee always knew Klein brought back from his business trips to China.

And there's a deep personal pain. It's been two months since the 35-year-old was murdered in her Chinatown apartment.

Now this exhibit is for Lee, with her own pieces hanging next to art from other artists.

And Klein will be donating more than half of the sales until June 5th to her memorial fund.

"People can come and pay tribute to her life and both celebrate her life and mourn its loss," curator Stephanie Mei Huang said.

Curator Stephanie Mei Huang chose the other pieces carefully along with the artists.

"The exhibit has a tenure of mourning Asian death," Haung said. "Hana has compiled these guns from headlines that list Asian hate crimes."

At a time when fear of Asian American hate crimes is at the forefront everyone involved in the creation of this exhibit wants to create a safe haven in Lee's memory.

"To have a safe space that is open during public hours for almost two months with an attendant there is really important to me," Haung said.

And to remember a woman who had so much to give and such little time to do it.

"We hope that she is with us in one way or another throughout the entire exhibition," Klein said.