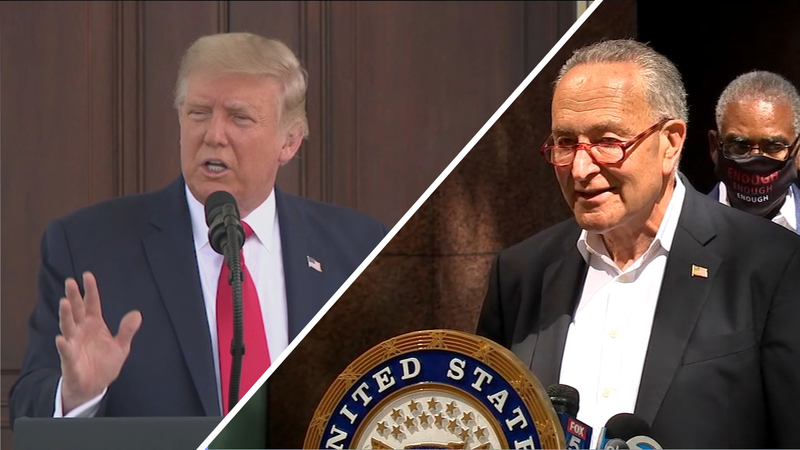 NEW YORK (WABC) -- Senator Charles Schumer spoke out Monday on the GOP-proposed COVID-19 relief bill, criticizing it and saying the bill seeks to "rot the core of the Big Apple."

Schumer was joined by New York City officials in disagreement against the proposed bill, which they say simply acts as a "box-check" for Senator Mitch McConnell and President Donald Trump's handling of the pandemic.

"The bill leader McConnell is putting on the floor of the Senate this week on COVID is a dagger to the heart of New York," Schumer said.

Schumer warned that the GOP bill is "emaciated," especially when it comes to New York's plight.

He said after his team worked hard to pass "a great bill" for the House that included critical funds for state and local aid along with mass transit -- two now-suffering priorities important to the larger economy -- "zero" of those ended up on the proposed bill.

Sen. Schumer spoke out against the proposed COVID relief bill.

"Their proposal barely lifts a finger to help our great city and our great state," Schumer said.

Schumer has said he was hopeful that with the highest unemployment since the Great Depression and the worst public health crisis since 1918, there could be progress made in our negotiations with the White House during the month of August. But, he said, President Trump, led by Chief of Staff Mark Meadows, have embraced a hardline view that the federal government should be doing less, not more, during this time of national crisis.

He emphasized the proposal won't pass the House nor Senate.

"The bottom-line here is that a relief bill woefully deficient of New York's needs will be fought tooth and nail," Schumer said.