7 On Your Side: Queens baseball teams unable to use home field get new mound 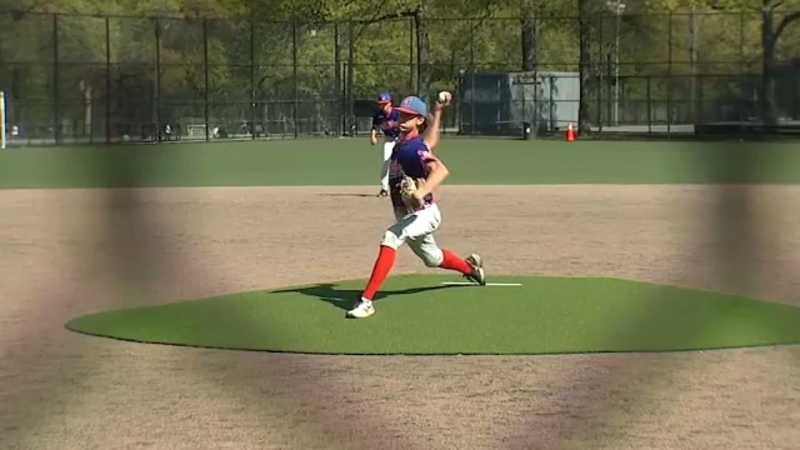 The problem was that the city hadn't ordered the right sized pitching mounds, and even efforts to fix the problem were slated to take months.

7 On Your Side's Nina Pineda took the fight all the way to City Hall, until she got a big W.

"It's our home field, and we can't even play on it," Queens Metropolitan High School varsity third-baseman Nicholas Wayte said. "It's kind of disgrace."

His mom called 7 On Your Side back in March, frustrated with the city. Now, there's a brand new pitching mound finally delivered after a two-year wait.

"I think it horrible," mom Michele Wayte said. "This isn't a big ask. It's just a baseball mound for the kids."

But on Monday night, Victory Field hosted its first official home game since before the pandemic.

"Everybody is thrilled," said David Testerman, whose son plays on the team. "We haven't played here, a home game, since (son) Dawson's been a freshman. We haven't been here."

At their multi-million dollar Astroturf home field, they only had a 10 foot Little League mound. That's too small, as the league mandates high schoolers need a much larger 18 foot mound.

So the student athletes were banned from playing home games, shuttled to play sometimes at inferior fields for most of two seasons.

"This is not fair," Construction High School varsity coach Dan Paradis said. "These are good kids. They just want a mound. We should've had a mound yesterday. Please give us a mound."

After we shared the Construction High School team plea for Mayor Eric Adams at a press conference in April and told him 7 On Your Side found a mound that was crated and ready to ship, the city came through, expediting its procurement process.

And just like that, it was out with the old and in with the new at one of the two fields.

"You're an honorary member of the Metro Knights baseball team," Metropolitan Coach Ian Freed said. "The boys and I, we all signed the ball. We couldn't have done it without you. We have nothing but thank you from us to you, Channel 7, just thank you so much."

Freed even asked Pineda to throw out an inaugural pitch.

So why did it take so long? A city spokesperson blamed much of the delay on COVID, saying they had to prioritize purchasing needs for the city. As far as the other mounds, the parks department said "PSAL (Public Schools Athletic League) is looking into purchasing additional mounds."

Those three teams still can't play games at home, and we hope they can celebrate a victory like the boys at Victory Field soon.

And on their home field, the Knights ruled, with their pitcher throwing a one-hitter with 18 strikeouts.

Fill out the form below or email your questions, issues, or story ideas by filling out the form below or by emailing 7OnYourSideNina@abc.com. All emails MUST INCLUDE YOUR NAME AND CELLPHONE NUMBER. Without a phone number, 7 On Your Side will not be able to respond.
Report a correction or typo
Related topics:
sportsqueensnew york citybaseball7 on your side
Copyright © 2022 WABC-TV. All Rights Reserved.
TOP STORIES
Girl fatally shot in stomach by gunman on scooter ID'd
NYC expected to elevate to 'high' COVID alert level in coming days
President Biden to meet with Buffalo shooting victims' families
LIVE | Eyewitness News This Morning
Man dead after flames ravage home in Brooklyn
AccuWeather: Refreshing and breezy
Gunmen wanted in string of armed robberies in Brooklyn
Show More
Return of warm weather brings tick season, NY officials issue warning
'Be very afraid': Mayor warns of potential Supreme Court gun ruling
NJ residents angry with homeless shipping container housing location
You can now order 3rd round of free at-home COVID-19 tests
Elementary student brings loaded gun to school in NJ
More TOP STORIES News