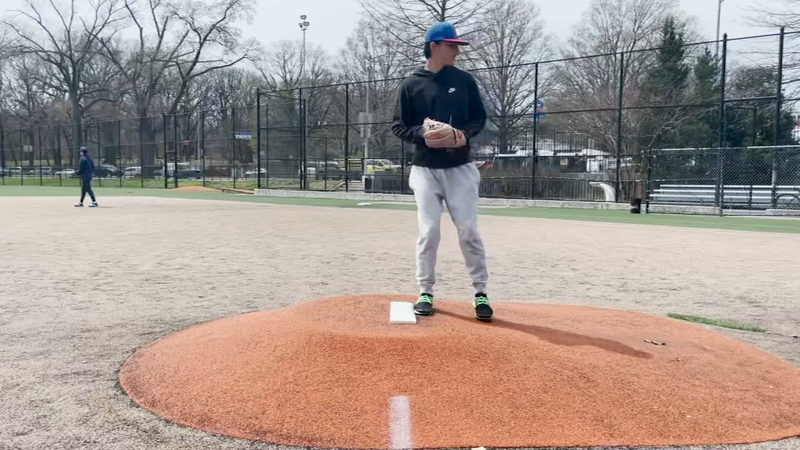 QUEENS, New York City (WABC) -- Millions of taxpayer dollars were spent to build beautiful turf baseball fields in Queens, but because the city didn't order the right pitching mounds, no high school games have been allowed for years.

Nina Pineda and 7 On Your Side told the story, which led others to come forward with their frustrations of more idle fields. So we went to Mayor Eric Adams for answers.

"Mayor Adams, please get us a pitching mound," players from Construction High School said in unison.

The Construction High School Redhawks are pleading with the mayor after seeing our story on their rivals, the Queens Metropolitan Knights, calling out the city.

Like the Knights on Victory Field, the Redhawks are also not allowed to play games on their home field, Tudor Field in Ozone Park, for the past two years.

Both have the same problem: Their portable pitching mounds are too small, just 10 feet wide when safety regulations require 18-foot mounds for high schoolers.

"It's so small the kids can fall off the mound and break a leg," Construction High School Coach Daniel Paradis said.

Both coaches say the same thing, that they cried foul to the city parks department during the shortened COVID season back in 2020.

But it's been two years, and the parks department has not replaced the mound.

Now, a total of five high school teams are on a perpetual road trip, banned from playing any games on two state of the art AstroTurf diamonds.

"I have 14 kids on my team, and only two kids have ever played a home game," Metropolitan Coach Ian Freed said.

Player Thomas Mead's mom and all the parents pitch in to carpool for their "all away game schedule."

After our pleas, the Department of Parks finally placed an order, promising the mounds would hopefully arrive by the summer.

"I don't understand why it can't just be here while we have a month, month and a half left in our season," Freed said.

We agreed so we took pleas straight to City Hall.

"That makes no sense for that to happen," Adams said. "Let me look at that. It should have not taken two years to get a mound here. We're going to do everything that's possible to get these children to play."

The mayor went to bat, and now, the Victory Field mound is scheduled to be in place for home games next week. Tudor Field hopes they can hit a home run next.

"New York City's children deserve and need safe places to play, which is why we working to expedite delivery of this mound," Adams said.

Fill out the form below or email your questions, issues, or story ideas by filling out the form below or by emailing 7OnYourSideNina@abc.com. All emails MUST INCLUDE YOUR NAME AND CELLPHONE NUMBER. Without a phone number, 7 On Your Side will not be able to respond.
Report a correction or typo
Related topics:
sportsqueensnew york citybaseball7 on your side
Copyright © 2022 WABC-TV. All Rights Reserved.
TOP STORIES
Girl fatally shot in stomach by gunman on scooter ID'd
NYC expected to elevate to 'high' COVID alert level in coming days
President Biden to meet with Buffalo shooting victims' families
Man dead after flames ravage home in Brooklyn
AccuWeather: Refreshing and breezy
Gunmen wanted in string of armed robberies in Brooklyn
Return of warm weather brings tick season, NY officials issue warning
Show More
'Be very afraid': Mayor warns of potential Supreme Court gun ruling
NJ residents angry with homeless shipping container housing location
You can now order 3rd round of free at-home COVID-19 tests
Elementary student brings loaded gun to school in NJ
Baby giraffe fitted with orthotic at San Diego Zoo Safari Park
More TOP STORIES News