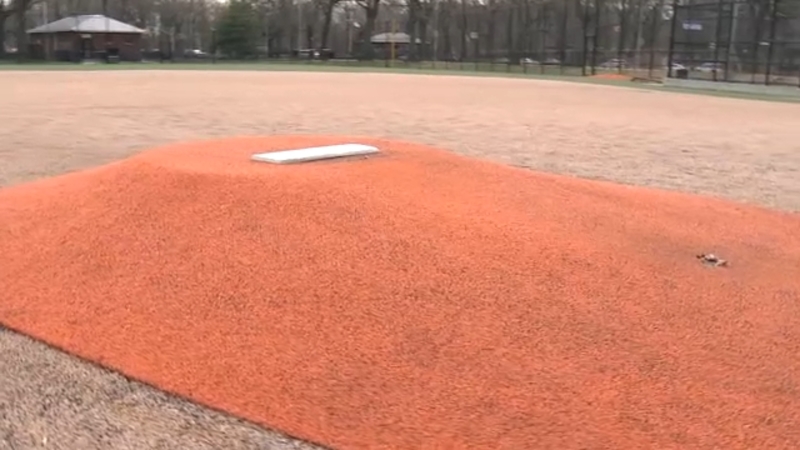 QUEENS, New York City (WABC) -- Parents and coaches are frustrated with the New York City Department of Parks, saying it dropped the ball in failing to order a simple pitcher's mound for a baseball field.

As a result, for the past two years, several high school varsity baseball teams are on a perpetual road trip, not allowed to use their home field.

That is, until 7 On Your Side's Nina Pineda stepped to the plate.

For two seasons now, the Queens Metropolitan varsity baseball team has played all their home games on the road, on inferior fields.

"It's disappointing because the kids don't have a field to call home," parent Michele Wayte said.

They're not allowed to play at Victory Field, their state-of-the-art home AstroTurf field the parks department built for $1.5 million.

"I have 14 kids on my team and only two kids have ever played a home game," head coach Ian Freed said.

Richmond Hill's varsity and JV teams also share Victory Field, but all three were told by the city that the field is off limits because the portable pitching mound is too small.

The mound is 10 feet, while regulations say it must be 18.

"Every time I pick off at second, my ankle would roll," pitcher Dawson Montesa said. "So I'm scared of getting injured."

Last May, Freed texted the parks department administrator over and over, telling her the mound was too small and needed to be fixed. She promised to "write back ASAP."

"And then still, nothing has happened," Freed said. "So I don't know what the disconnect is.

With more road games, parents seldom see them, transportation is scarce, and kids must carpool to games.

"The further we travel, they must get out of school earlier," Freed said. "It's tough.

Instead, they play their home game at a nearby neutral field, including one that's not in good shape.

And in the very first inning of a recent game, a player was hit by bad hop grounder and was carted off the field with a broken nose.

I think it's horrible," Wayte said. "We pay our taxes. This isn't a big ask."

We contacted the parks department and Mayor Eric Adam's office about the delay of game, and within days, the mound was finally ordered. But it won't deliver for months, so we found a different supplier -- a Kansas City company that makes the mounds.

Peter Hanes, the owner of Aeroform Athletics in Missouri, had a mound crated for the Queens boys' teams and was willing to donate the cost of freight for their cause -- meaning they could have it in as little as a week.

It was a last-minute CARFAX confusion when one New Jersey car owner found her vehicle history report had one big error costing her thousands. Nina Pineda has the story.

He spoke to the city at our request, but they declined to take him up on the offer.

"They said, 'OK, we can't make any promises, but we'll do everything we can,'" Hanes said. "And that was the last we heard from them."

Despite 7 On Your Side finding that resource for the city, the parks department said it was going with its approved vendor, which won't deliver until this summer.

"It's really really upsetting," Freed said. "So if the mound is ordered, I don't understand why it can't be here while we have a month, month and a half left in our season."

His players don't get it either. Some are seniors hoping for scholarships and will graduate never having played with a real home field advantage.

Fill out the form below or email your questions, issues, or story ideas by filling out the form below or by emailing 7OnYourSideNina@abc.com. All emails MUST INCLUDE YOUR NAME AND CELLPHONE NUMBER. Without a phone number, 7 On Your Side will not be able to respond.
Report a correction or typo
Related topics:
sportsnew york cityqueensrichmond hillbaseballhigh school sportsnyc parks7 on your side
Copyright © 2022 WABC-TV. All Rights Reserved.
7 ON YOUR SIDE
7 On Your Side helps rescue deposits for NJ apartment fire victims
Baby formula scams are skyrocketing: How to avoid getting duped
United cancels couple's flight, charges $4K more for same seats
529 Plans - How they can help you save/pay for college
TOP STORIES
Police fire shots after gunfire erupts at Queens intersection
Tree crashes down on backyard tent in New Jersey
Bicyclist struck and killed by MTA bus in Queens
Uvalde school police underwent active shooter training 2 months ago
Police shoot driver after vehicle strikes officer in Brooklyn
4 arrested during Memorial Day Weekend impaired driving crackdown
Flight cancellations kick off Memorial Day weekend
Show More
New York offers driver's licenses with "X" gender marker
Police: Suspect tells teen he is 'going to get rid of all you Jews'
Bethpage Air Show cancels remainder of Saturday lineup due to weather
AccuWeather: Less humid
NYC beaches officially open to swimmers this Memorial Day weekend
More TOP STORIES News