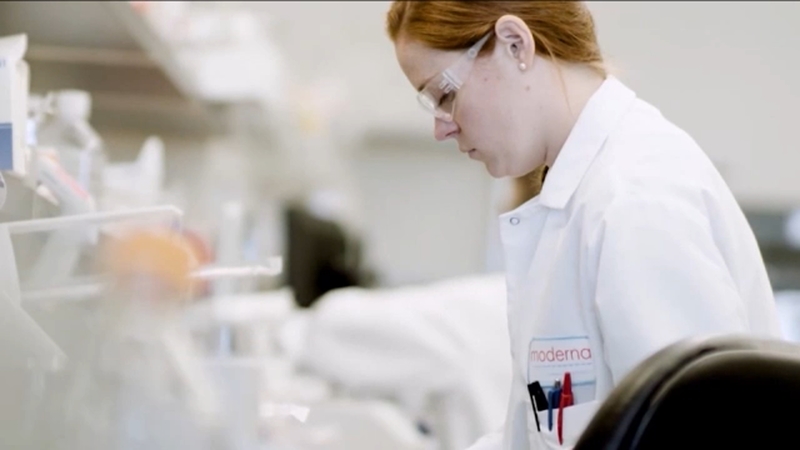 NEW YORK (WABC) -- Moderna's trying to transfer the technology it used for its COVID vaccine to create a better flu shot.

The company says it has started clinical trials of a flu shot that utilizes mRNA therapeutics.

Moderna says its mRNA-1010 is a quadrivalent seasonal influenza vaccine candidate targeting WHO recommendations including A H1N1, H3N2, and influenza B Yamagata and Victoria lineages.

The current flu vaccines have about 50% effectiveness.

Moderna's COVID vaccine claims to prevent infection more than 90-percent of the time.

The company says it could eventually combine the flu, RSV, and COVID booster vaccines into one shot.

COVID deaths hit 4 million worldwide
The global death toll from COVID-19 eclipsed 4 million as the crisis increasingly becomes a race between the vaccine and the highly contagious delta variant. The tally of lives lost over the past year and a half, as compiled from official sources by Johns Hopkins University, is about equal to the number of people killed in battle in all of the world's wars since 1982, according to estimates from the Peace Research Institute Oslo. With the advent of the vaccine, deaths per day have plummeted to around 7,900, after topping out at over 18,000 a day in January.

But in recent weeks, the mutant delta version of the virus first identified in India has set off alarms around the world, spreading rapidly even in vaccination success stories like the U.S., Britain, and Israel. The U.S. and other wealthy countries have agreed to share at least 1 billion doses with struggling countries.

Weekly deaths at lowest level since October
The World Health Organization says the number of coronavirus cases ticked up worldwide last week even as the weekly count of COVID-19 deaths dropped to the lowest level since October. The U.N. health agency, in its latest weekly epidemiological report on the pandemic, also said on Wednesday that its 53-country European region reported a "sharp increase" - 30% - in infection incidence, while Africa registered a 23% rise in mortality from COVID-19 during the period. All WHO regions except the Americas -- one of the hardest-hit regions -- and southeast Asia posted an increase in deaths over the last week, the agency said in a statement. More than 2.6 million new COVID-19 cases were reported between June 28 and July 4, a slight increase on the previous week, while the tally of deaths registered over the week declined 7% to 54,000, WHO said. That was the lowest such weekly figure since October.

Party all night? NYC's Office of Nightlife wants 24-hour districts
The city that never sleeps could live up to its name under a New York City agency's proposal for 24-hour entertainment districts where revelers can party all night. The city's Office of Nightlife is recommending that officials identify areas with low residential density "where a limited 24-hour program might be tested." The recommendation is contained in a 160-page report issued this month by the nightlife office.
"Cities around the world are expanding the way institutions and businesses can operate at night, as limitations on closing hours have pushed latenight activity to unlicensed venues, sometimes coming into conflict with residential uses," the report says. "Uniform closing hours for nightlife businesses can result in groups of people congregating in the street, elevating tensions between patrons and residents."

Poll among unvaccinated Americans
The CDC reports 67% of adults in the United States have had one dose and 58% are fully vaccinated. A new ABC News-Washington Post poll finds that among those unvaccinated, 74% say they're unlikely to get a shot. President Joe Biden called Americans to action and asked them to get the vaccine.
"My fellow Americans, it's the most patriotic thing you can do," he said. "So please, if you haven't gotten vaccinated, do it. Do it now."

Staten Island communities among highest COVID positivity rates in NYC
New York City may be starting to celebrate the end of the pandemic, but some communities on Staten Island are proving it's not over yet. There are 145 zip codes in New York City, and the one with the highest rate of COVID positivity is 10308 on Staten Island, a stretch of strip malls and single-family homes in the Great Kills section, where the positivity rate is above 5%. So why is COVID surging here? Well, that's COVID.
"It's an opportunist," New York City Health Commissioner Dr. David Chokshi said. "It goes to places where it has a chance to spread."

NYC vaccination rates by zip code
There are about a dozen communities in the New York City area where three out of four people have not been vaccinated yet. 7 On Your Side Investigates created a map where the darkest colored zip codes have the most vaccinated New Yorkers and the lightest, the least.