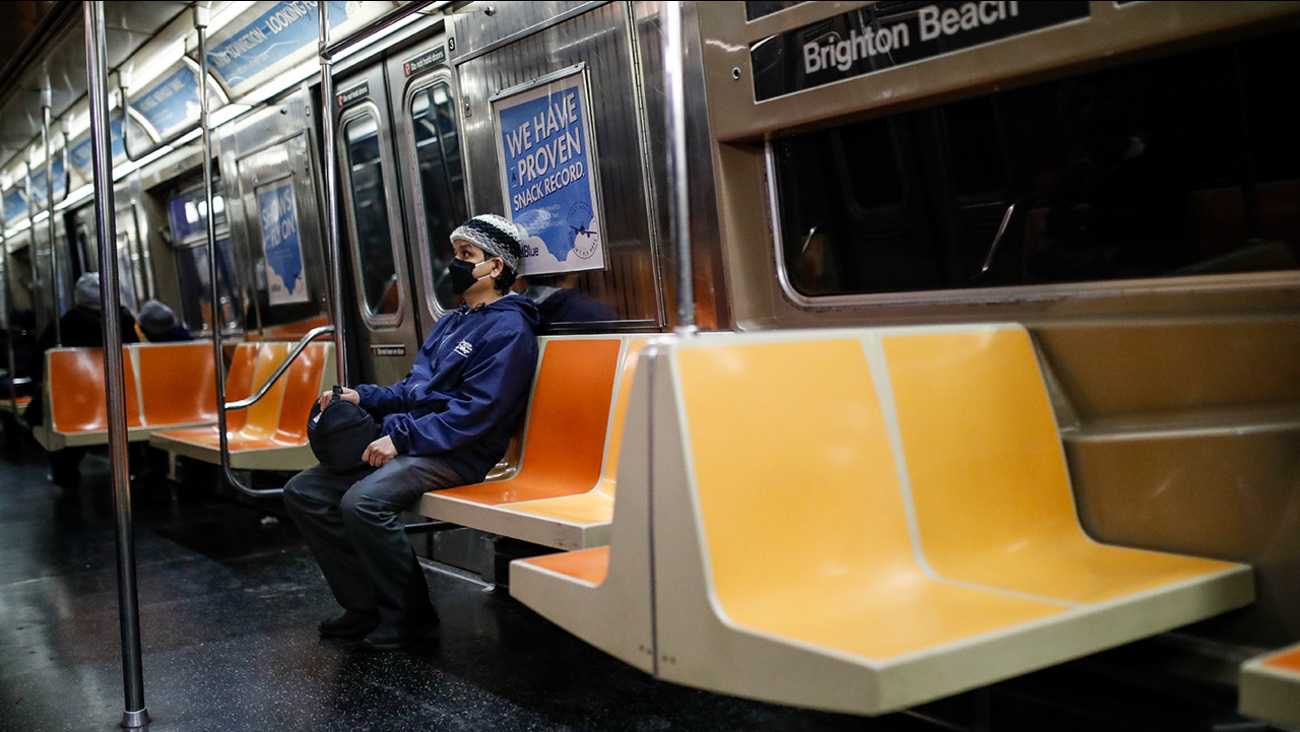 A commuter wears a face mask while riding the a nearly empty subway car into Brooklyn, Thursday, March 12, 2020, in New York. (John Minchillo)

NEW YORK -- The stage at the 5th Avenue Theatre in Seattle is quiet. There is no music coming from the Boston Symphony Orchestra and the members of Pearl Jam won't tour. There is no one to admire the treasures at The Metropolitan Museum of Art in New York.

The ongoing fears surrounding the coronavirus have shuttered places where Americans - and foreign visitors - have long gathered to escape the world and also to engage with it. Almost everything that draws crowds has now sent them all away.

Wisconsin resident Ellen Moodie, 58, found herself in New York, twice rejected. She came for the Big East tournament at Madison Square Garden, but that was canceled. So she tried to catch a Broadway show, but those too were were canceled. She admitted to being a little disappointed.

"We would love to see a show but understand the situation," she said.

The list of venues where Americans can no longer find entertainment or diversion continues to climb - so far scrapped or shuttered are everything from Coachella to Carnegie Hall, Major League Soccer, Disneyland and the John F. Kennedy Center for the Performing Arts.

Bob and Diane Erickson, of Cambridge, Minnesota, were taking no chances Thursday, hitting all of Nashville's major tourist destinations that were unaffected thus far, including The Grand Ole Opry and the Ryman Auditorium.

"We're just kind of watching it," said Bob Erickson. "And frankly, it's going to get bigger."

The closures of museums and theaters and concerts come even as families find their kids locked out of school with nothing to do and arts institutions worry about keeping the lights on without ticket sales.

"It's the people that are down here, trying to earn that dollar that it's going to affect the most," said Mike Beliles, of Wilmington, North Carolina, who was visiting Nashville. "It's the people who are trying to make ends meet and they aren't able to work."

For most people, the coronavirus causes only mild or moderate symptoms, such as fever and cough. For some, especially older adults and people with existing health problems, it can cause more severe illness, including pneumonia.

Apprehension of the virus has claimed an astonishingly varied list of events stretching beyond the traditional arts, from the Houston Livestock Show and Rodeo to the New York International Auto Show. Big events in big venues like the NBA season and NCAA basketball tournaments were felled by coronavirus, but smaller and less raucous get-togethers were also abandoned, too.

Around the country, bookstore appearances by James McBride, Louise Erdrich and many others were postponed or canceled during what is usually one of publishing's busiest seasons. The prize-winning author and illustrator Gene Luen Yang called off the tour for his graphic novel "Dragon Hoops."

The Brooklyn Public Library in New York suspended or postponed all public programs until at least the end of the month. Jakab Orsós, the vice president of arts and culture, called the move "only responsible action we could take." He said the virus is making those in the world of culture humble.

"Its a bitter lesson, that we are not the rulers of the universe. We got very comfortable thinking we could overcome everything. Sometimes we have to learn that there are stronger powers. It's larger than culture, it's universal," he said. "We have to change course. Whatever that is - we have to learn this message. This is a huge and important lesson, especially in the Western world."

New York Gov. Andrew Cuomo on Thursday banned gatherings of 500 or more in the city, effectively forcing the hand of Broadway producers who had previously said that Broadway would be "open for business" unless advised not to by the government. Shows are now slated to resume the week of April 13.

Would-be theater attendees were turned away in the theater district, some shaking their heads in disbelief.

"I had been hoping to catch one but it's all canceled," said Quinn Heath, 24, who was visiting from Boston.

Closing all Broadway theaters for a month is unprecedented, said Laurence Maslon, an arts professor at New York University's Tisch School of the Arts. "Nothing comes close to this amount of time ever."

Other theaters far from Broadway have closed their doors, including the Wallis Annenberg Center for the Performing Arts in Southern California, which canceled or postponed all productions and programs through March 31. Coronavirus has altered the run of "Guys and Dolls" at the Ford's Theatre in the nation's capital.

The 5th Avenue Theatre in Seattle closed the doors on "Sister Act," citing the state's mandated cancellation of public gatherings, and is now asking for donations to recover $1 million in losses. The 1,600-seat Curran Theater in San Francisco decided to scrap performances of "Harry Potter and the Cursed Child."

Actors' Equity Association, which represents more than 51,000 actors and stage managers nationwide, called the decision to shutter Broadway "important" and urged lawmakers to come to the aid of workers in the arts.

"Today's decision means tremendous uncertainty for thousands who work in the arts, including the prospect of lost income, health insurance and retirement savings," the group said. "For every middle-class actor you see onstage, there are dozens of other workers behind the scenes and in an administrative capacity."

The virus' arrival came just as Americans shake off the winter blues and plan spring events - concerts, games and shows. But no more.

"This is one of the hearts of the season where we have really a lot going on," said New York Philharmonic president Deborah Borda. "It is going to be an enormous financial challenge involving millions of dollars for all of these institutions."

The Associated Press receives support for health and science coverage from the Howard Hughes Medical Institute's Department of Science Education. The AP is solely responsible for all content.

School closings across the Tri-State