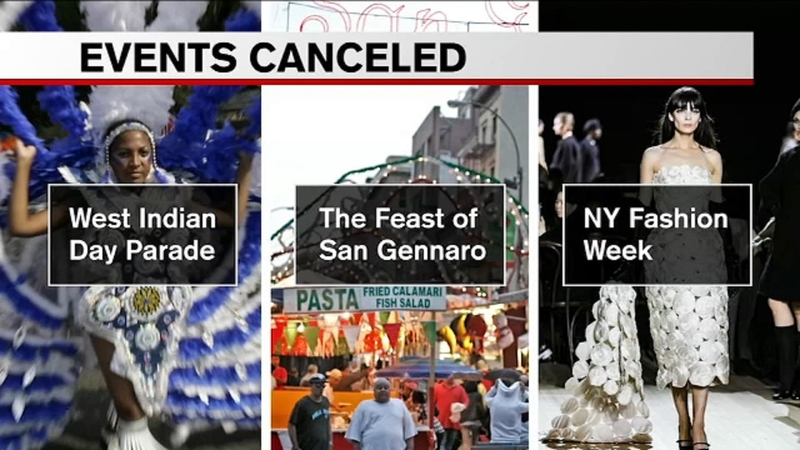 NEW YORK (WABC) -- New York City Mayor Bill de Blasio announced Thursday that all large events requiring a city events permit will be canceled through September 30 -- including the West Indian Day Parade and Feast of San Gennaro -- as the city works to prioritize open spaces for public use.

The city will not issue a permit for any event in a location that interferes with the Open Streets or Open Restaurants program, and permits will also be denied for all events larger than one block, stage/video events that require amplification, street fairs, and events in parks that may unreasonably diminish public use. The city will refund or defer fees paid in connection with a denied permit.

"As New York has begun its reopening process, accessible open spaces are more important than ever," de Blasio said. "While it pains me to call off some of the city's beloved events, our focus now must be the prioritization of city space for public use and the continuation of social distancing."

Events that do not conflict with Open Streets or Open Restaurant areas and are for locations one city block or smaller can still apply for a permit.

CATHOLIC SCHOOL CLOSINGS
The Archdiocese of New York announced that 20 Catholic schools will be unable to reopen in the wake of the COVID-19 pandemic, and three other schools will merge.

The coronavirus public health crisis has had a devastating financial impact on Catholic school families and the greater Archdiocese, officials said.

Additionally, as part of the city's Cool It NYC program, more than 34,000 air conditioning units have been provided to seniors in need. Sprinklers, spray showers, and misting stations are reopened, and there are 950 existing cooling elements with the city adding 250 new sites as well. During heat advisories, the FDNY and DEP will install up to 320 additional spray caps on hydrants citywide.

You can visit NYC.gov/Parks/CoolItNYC to find a cooling element near you, or you can call 311 to request a spray cap. Cool Streets are going to be part of the Open Streets program in heat-burdened neighborhoods.

NEW YORK STATE
Governor Andrew Cuomo cleared the way for shopping malls to reopen across New York state, allowing indoor malls to get back to business as long as they have special air filtration systems in place. It applies to regions in Phase 4 of their reopening, which at present does not include New York City.

Up to now, only stores with separate entrances outside were permitted to open, eliminating most small stores on the interior corridors. Most malls only had the major retail anchor stores and a few restaurants operating.

The face coverings would be required outside only when people are in public and are unable practice social distancing.The state already requires wearing a face covering at indoors public spaces.

Additionally, New Jersey will be allowing restaurant dining spaces with fixed roofs that have two open sides comprising over 50% of the total wall space to be considered outdoors.

Murphy also exempted New Jersey Motor Vehicle Commission personnel from any work furloughs as the department is working through a massive backlog. Beginning on Monday, MVC offices will be open six days a week.

CONNECTICUT
Gov. Ned Lamont said Connecticut will pause going into Phase 3, "erring on the side of caution," after seeing what happened in other states. The decision means bars will not reopen and gatherings will be limited to 25 people inside and 100 outside.

Connecticut's Phase 3 reopening was expected sometime in mid-July. On Tuesday, the state announced zero new deaths from the coronavirus for the first time since March.