Crane comes crashing down onto 2 homes in New Brunswick 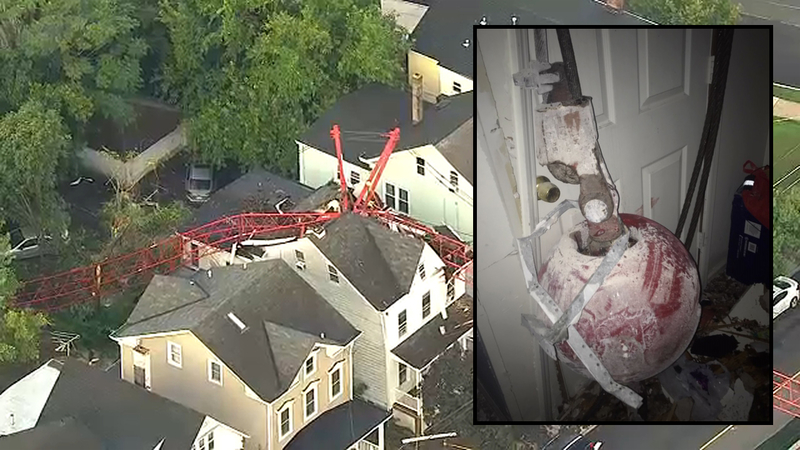 Crane comes crashing down onto 2 homes in New Brunswick

NEW BRUNSWICK, New Jersey (WABC) -- A crane collapsed across a New Jersey street during a storm late Sunday, damaging two houses and leaving a home with a crushed roof and a wrecking ball on the ground floor.

The crane came crashing down on Hamilton Street in New Brunswick, and the victims are just happy no one was hurt.

Residents in the area approached Eyewitness News on the scene to say that they always saw the crane stored straight up and down and they don't know why. They felt it should have been brought down when it wasn't actively being used on the construction project.

The crane's arm folded right near the base, falling on a home right across the street and on the next block over.

The buildings are used mostly for student housing at Rutgers University.

The owner of one of the damaged buildings said it was amazing that no one was hurt.

"No one home, thank God, that's the most important thing," George Chedid said. "Two girls live there now, and they were out with their families. They just happened not to be there. They were there all weekend, but just several hours in the midday until the late evening, they were not there."

The buildings have to be fully inspected to see if structural integrity has been compromised.

"Very heavy damage," Chedid said. "It's like the wrecking ball went through the whole home, through the staircase, and landed right back on the first floor."

One witness said he saw a lightning strike during a torrential storm with heavy winds, but the investigation is ongoing.

The collapse is under investigation, as city engineers work to remove the crane.

PSE&G is on the scene to tend to any electrical issues.

The company that owns the crane, Vergona Crane, had no comment at this time.