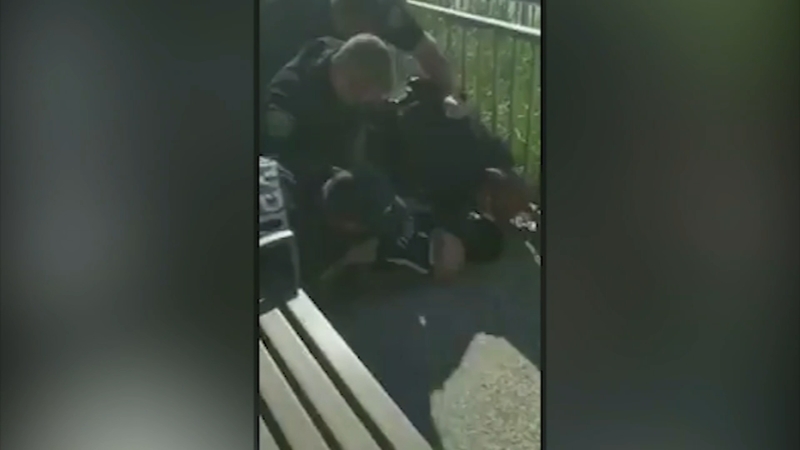 KEW GARDENS, Queens (WABC) -- The NYPD officer who allegedly used an illegal chokehold during an arrest in Queens surrendered to face charges Thursday.

Officer David Afanador turned himself in at the Queens District Attorney's Office in Kew Gardens. The 39-year-old is charged with strangulation and attempted strangulation.

Cell phone video showed him performing the banned chokehold Sunday in Rockaway Beach as police were trying to arrest a man who they say was threatening them.

The arrest was captured by multiple cameras, and video shows 35-year-old Ricky Bellevue being placed in an illegal chokehold moments after police say he motioned toward a trash can, possibly to throw it at cops.

Body cam video shows officers engaging with a group of men on the boardwalk for more than 10 minutes, with the group taunting and cursing the officers, all while recording.

After his arrest, Bellevue can be heard saying he's bipolar.

Officer Afanador was immediately suspended without pay, but the new Eric Garner Anti-Chokehold Act calls for anyone who does the maneuver to be charged.

"Two things happened in this incident that we haven't seen enough in the past," Mayor Bill de Blasio said. "Very fast immediate disciplinary action...and we saw another officer intervene. And that represents the best of our police."
EMBED More News Videos

A police officer involved in apparent chokehold incident in Queens has been suspended without pay, NYPD Commissioner Dermot Shea said on Sunday.

During a brief arraignment, the defense entered a not guilty plea on Afandor's behalf. He faces seven years in prison if convicted.

Afandor was released on his own recognizance and ordered to surrender his passport and stay away from Bellevue.

"The ink from the pen Gov. Cuomo used to sign this legislation was barely dry before this officer allegedly employed the very tactic the new law was designed to prohibit," Queens District Attorney Melinda Katz said. "Police officers are entrusted to serve and protect, and the conduct alleged here cannot be tolerated. This police officer is now a defendant and is accused of using a chokehold, a maneuver we know has been lethal."
EMBED More News Videos

Mike Marza reports the NYPD officer who allegedly used an illegal chokehold during an arrest in Queens surrendered to face charges Thursday.

"Even under the most difficult of circumstances, this maneuver, this kind of action, is exactly the kind of police conduct that the NYPD has banned and our State Legislature criminalized," Katz said.

Afanadaor has had eight complaints against him in the past.

In 2016, he was acquitted of a felony assault charge during a different arrest.