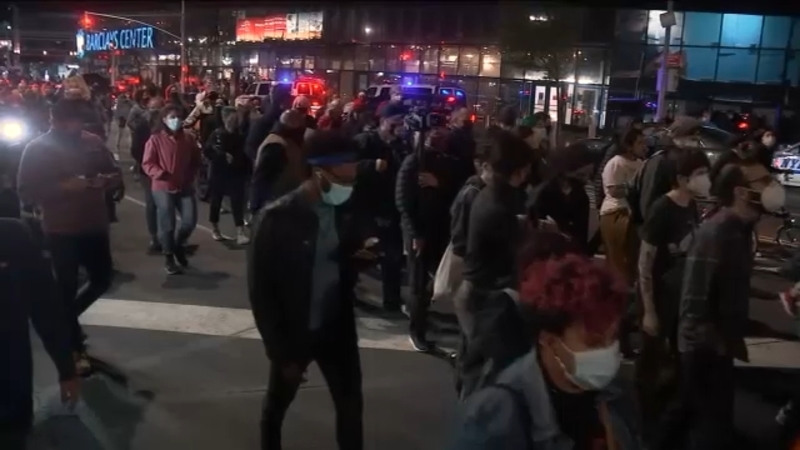 NEW YORK (WABC) -- The jury found Derek Chauvin guilty of all charges in the death of George Floyd, and as the world watched, the NYPD took steps to keep New York City safe.

The conviction of Derek Chauvin brought out hundreds to the Barclays Center in Brooklyn for a collective sigh of relief Tuesday night.

They were loud, expressing their displeasure with aggressive policing, but tonight it was more words than action.

Many marched recalling the names of the victims of police abuse as they walked along Flatbush Avenue, blocking traffic on the way to Grand Army Plaza. They say the verdict is just one step in the struggle to seek justice.

Police forces around the country had been bracing for protests after the verdict, and it was no different in the Big Apple.
EMBED More News Videos

Candace McCowan reports from outside the Barclays Center in Brooklyn.

NYPD Commissioner Dermot Shea said officers would be out Tuesday night to "ensure that peaceful demonstrations have the ability to proceed safely."

Justice has been served. NYPD will be out tonight to ensure that peaceful demonstrations have the ability to proceed safely.

The NYPD says community affairs officers would be on the front lines of any protests this time around after nearly a year of training, and Mayor Bill de Blasio urged calm.

"For everyone who was just profoundly troubled and disgusted by what happened in Minneapolis and seeks justice and seeks change, I'd say your voices have been heard in this city and all over the country, and a lot of changes are being made right now," de Blasio said. "A lot of reforms, a lot of things we need to do different and better in the way we police communities and work with communities and more needs to be done and more will be done, and that is achieved through peaceful protest."

"It's never really ended," he said. "We're just asking anyone that, that may come out to voice their, you know, concerns over this trial to let's just work together, do it peacefully, no property damage and we'll get all through it together."

De Blasio said the city has been preparing for some time.

"We're in constant, literally daily conversations," he said. "Obviously, so much will happen based on what the verdict is and how it's expressed."

There have been calls for the NYPD to use restraint during any potential demonstrations, this after the department was accused of using excessive force in the protests last summer.

In Minneapolis, thousands of members of the National Guard have been brought in and schools have moved to remote learning.